Court ruled that cryptocurrency exchanges have not adversely impacted the nation's economy.
Written by Campbell Kwan, Journalist on March 4, 2020 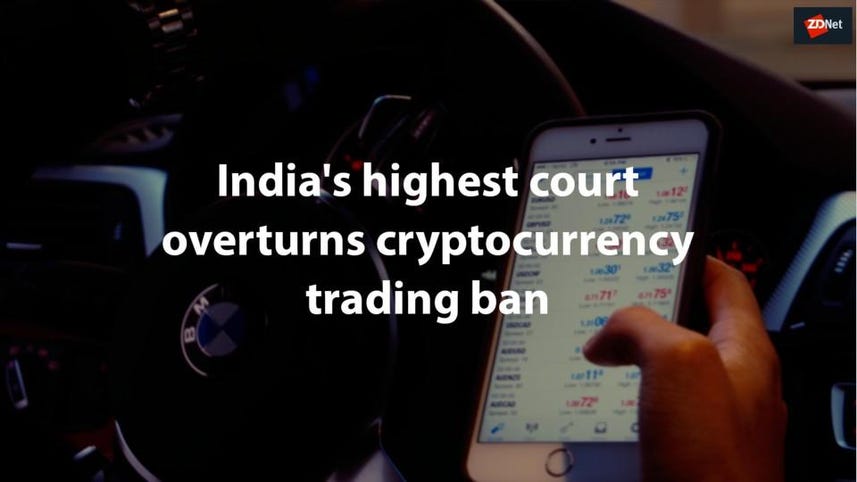 India's Supreme Court has overturned an almost two-year ban on cryptocurrency trading that was enforced by the country's central bank.

The ban, imposed by the Reserve Bank of India (RBI) in April 2018 due to concerns of consumer protection, market integrity, and money laundering, had resulted in banks and other financial institutions being prohibited from dealing with entities that used cryptocurrency.

The lawsuit to allow cryptocurrency exchanges once again in India was raised by the Internet and Mobile Association of India, an industry body representing "the interests of online and digital services industry", which argued that the RBI's ban was disproportionate to its aim of protecting consumers.

While the court acknowledged that the RBI's decision to ban cryptocurrency schemes was not excessive at the time of its introduction, the court found that cryptocurrency exchanges -- dating back to at least 2015 -- have not adversely impacted the country's economy or its financial institutions.

"The RBI has not so far found, in the past five years or more, the activities of [virtual currency] exchanges to have actually impacted adversely, the way the entities regulated by RBI function," said Judge V Ramasubramanian.

Due to this, when doling out its judgment, the court said the ban on cryptocurrency trading was too extreme of a tool and that the RBI's objectives of protecting consumers and excessive volatility could be achieved through other regulatory measures.

In January, the Supreme Court ordered the Indian government to undergo a review of its suspension of internet services in the union territory of Jammu and Kashmir.

Shortly after the court-enforced review, the Indian government partially revoked its internet shutdown within the region, allowing people in the union territory to regain internet access to around 300 websites. The partial lift brought an end to a full-blown internet shutdown that lasted for almost six months.

UPDATE: The Department of Justice has also indicted the two Chinese nationals on money laundering-related charges.

Virgil Griffith, a member of the Ethereum project, faces up to 20 years in prison for breaking US sanctions.

From crypto currency to chocolate, where to spend your Bitcoin

Apple makes a big comeback in India, but will it last?

For the first time in its brief history in India, the premium brand has gone all out to woo customers with big price cuts, and thanks to local manufacturing efforts, it has worked wonders. However, India's Hindu supremacist government may torpedo all of that good work.

Coinsource now offers ATMs that customers can use to manage their Bitcoin.