Graphene batteries with the energy density to charge multiple devices at once are showing up in more portable battery banks, often as crowdfunded designs. A good example is the ScoutPro from Intelli, which can power five devices at once, including two laptops.

Crowdfunding has advantages and disadvantages. The ScoutPro has changed quite a bit from the initial project specs. Mostly that's an improvement. Instead of 20,000mAh it has the 24,000mAh capacity promised for the ScoutPro Max. And instead of one 60W and one 100W USB-C port, both USB-C ports are labelled 100W. Charging two laptops at once would run the battery down pretty quickly, but having 100W on both ports means you can plug your laptop charger and laptop into the ScoutPro (without worrying about which cable goes in which port) and both the laptop and battery would charge at the same time. 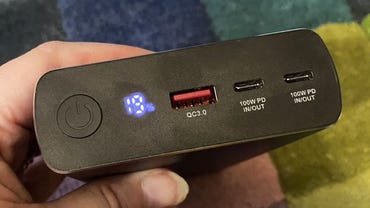 More disappointing is the change to the battery display on our review unit. Different promotional images (shown on the Intelli website) show both a basic battery indicator with the usual hard-to-interpret 5 bars and a detailed ePaper screen with even more detail than on the Chargeasap Flash Pro Plus, showing incoming and outcoming power levels and battery life in hours. What we actually got was a little OLED display with just a percentage on (which flashes rather annoyingly while charging), plus a green PD symbol when you have a PD-capable device and cable connected.

Seeing a percentage is much more useful than the vague 'you've got some power' of a battery bar, but you can understand and predict charging time and capacity much better with the detailed information we were expecting (and got from the Flash Pro Plus).

That's a good reminder that when even established hardware vendors are using crowdfunding sites, what you're ordering is a future product that may not match the renderings and product mock-ups shown in the marketing material.

Like the Flash Pro Plus, the ScoutPro has a graphene battery, plus two wireless charging locations -- one for a phone, and a smaller one for an Apple or Samsung watch. It has a USB-A port (with support for QuickCharge 3 and Huawei's 24W Super Charge), but only two USB-C ports instead of three on the Chargeasap device. But having both USB-C ports rated at 100W rather than the 20W/60W/100W options on the Flash Pro Plus could save you wasting time by charging too slowly if you don't double-check the port label. With fewer ports, there's room for the power button and display next to the ports, which is more convenient than having the screen on the top of the battery and the power button on the side.

Charging a phone or other small gadgets from the ScoutPro is much like plugging them into the wall, and there's enough capacity to charge them multiple times. Wireless charging worked well with two generations of iPhone and an Android phone. Getting an Apple Watch to charge was more fiddly -- you have to locate it very carefully on the charging spot -- but it worked once we had it in place.

Charging a laptop (while using it) is more demanding, and the speed and level of charge varies depending on the laptop's charge level. When you first connect the ScoutPro, the draw will be quite high as your laptop gets more power and the battery bank runs down; the charging rate then slows down somewhat.

We used the fully charged ScoutPro to power a 15-inch Surface Book 3 that had 42% charge: initially Windows estimated that would take 1 hour 51 minutes to fully charge; after a couple of minutes of power negotiation this dropped to 1 hour 2 minutes. It actually took 1 hour 10 minutes to run the ScoutPro down to zero, at which point the Surface Book had 96% charge, so the ScoutPro was about to give it just over a half charge.

It did better when charging a Surface Laptop 4 that was completely out of power and wouldn't even turn on, taking 1 hour 3 minutes to get to 65% charge. This accounted for 85% of the ScoutPro's charge -- not quite as efficient as the Chargeasap Flash Pro Plus, which only took 52 minutes to get the Surface Laptop 4 from 11% to 74% charge, and only used 63% of its own charge. However, charging a battery that's gone flat does take more energy.

The Intelli and Chargeasap are very similar in size and weight too: the curved sides of the ScoutPro are more comfortable to pick up, but even if you don't carry it in its protective case (which is rather bulky, but has room for cables, chargers, earbuds and other small gadgets), at over half a kilogram (610g, or 1.34lbs) you're going to know you have this in your backpack.

You'll also need to have your own 100W charger to charge the battery at full speed (many laptops that charge over USB-C come with 60W chargers). Using the Chargeasap 100W PD charger, we got to 98% charge from a completely flat battery in 1 hour 6 minutes (very similar to the Flash Pro Plus); using a USB-C Apple charger that delivers up to 60W it took 1 hour 20 minutes to get to 54% charge.

Intelli says the battery includes a USB 4 cable (with USB-C connectors), although it shipped separately from our test unit.

At $329.99/£240, the ScoutPro is quite a bit more expensive than other 24,000mAh portable batteries on the market (models that can't charge multiple laptops and don't include Qi charging cost £60-£80). It's also a little pricier than the $319 Flash Pro Plus, which is almost as capable and has a more informative display. It's worth shopping around though because currently, the ScoutPro is still available at lower prices -- $179/£134 on Kickstarter and Indiegogo, and $189.99/£142 on Intelli's own website.

Pick the ScoutPro if you need to charge two laptops and a slew of other devices at once, or if you expect to use the charge-through option to charge up your laptop and battery at the same time. Otherwise, the Chargeasap Flash Pro Plus is a slightly stronger contender for efficiency and has a more useful display. Both devices are full-power options, however -- with prices to match.

NOTE: After publication, Intelli informed us that a version of the ScoutPro with the fully featured OLED display (as shown on the company's website) will be in production soon:

Ecoflow Delta Max: Battery-powered generator can get you through most power outages

Join Discussion for: Intelli ScoutPro, hands on: A heavy-duty...