The tablet statistics just keep coming: one quarter of tablet owners in the US now say it's their primary computer , over 165 million tablets will be shipped next year, up from 117 million in 2012 , and Apple has around two-thirds of the tablet market .

The popularity of the tablet continues to grow, and businesses are beginning to come to terms with the slate invasion – one-fifth have them on their shopping lists, recent research found, and they are embracing the devices as part of the BYOD trend.

But there's one vertical where the tablet invasion has yet to make itself felt: government. While the UK public sector spends £16bn on IT a year, only the tiniest of tiny fractions goes on tablets.

ZDNet contacted more than 20 central government organisations, including some with annual IT budgets over £1bn, to see how many iPads they'd purchased over the last two years.

A number of central government departments, including the Home Office, the Department of Work and Pensions and the Department for Communities and Local Government, said they had bought no iPads at all since the start of 2010.

For several departments, however, iPad buying was restricted to a single or pair of iPads, most likely for testing purposes or, in the case of the Department for Education, deployed for use by visually impaired staff.

Of all the departments that responded to ZDNet's FOI (Freedom of Information) requests, only two had invested in the iPad on any significant level. Among these, the Department of Health said it had spent £66,300 on 50 iPads and related maintenance, infrastructure, support and software; this was part of an ongoing pilot to test whether the Apple devices should be added to the department's roster of mobile working equipment.

That the Department of Health should be among those thinking differently on tablets in government isn't exactly shocking – the health sector was one of the verticals where the tablets were first used years ago, before the iPad was even a gleam in Steve Jobs's eye.

"The Department of Health is following a trend which is already underway within parts of the NHS," said SA Mathieson, senior healthcare analyst at public sector analyst house Kable. "Some health professionals been using mobile devices for several years, for example to collect data from patients at home, although these have tended to be specialist, ruggedised devices."

"This year has seen several hospital trusts going for iPads," Mathieson said. "Bradford Teaching Hospitals is introducing up to 1,000 to provide access to electronic patient records, while Great Ormond Street Hospital has bought around 350 iPads and iMacs."

"Great Ormond Street's choice was based on its doctors saying they wanted to use Apple, and that's often how NHS technology adoption works when money is available. If doctors decide they want iPads, and their trusts can afford them, they are quite likely to get them," he added.

The health service may have a history of tablet use, but the Department of Health is not central government's biggest buyer of iPads: HM Revenue and Customs has purchased more than 100 of the Apple slates in recent years. During 2010, it bought 142 iPads and seven more in 2012. (The department is an enthusiastic user of Apple hardware – between 2010 to 2012, it spent over £600,000 on Apple products, excluding VAT – despite comments by its CIO that the products' security was "simply appalling".)

It's perhaps unsurprising that government IT buyers have in the main been reluctant to shell out on any large-scale iPad deployments: in a time of austerity, spending on what are considered non-essential gadgets by some sections of the electorate is not politically wise.

Take, for example, the backlash that greeted the first suggestions that MPs would be given their own iPads –  as the Daily Mail's headline talking of politicians "splashing out on new toys" demonstrates. (Presumably the Mail is equally outraged that members of parliament receive PCs and desk phones at taxpayers' expense too.)

"Even if I replace iPads twice a year, it's cheaper than our encrypted laptops" — Joan Miller, PICT

Despite the tabloid criticism, parliament has been unstinting in its backing for the devices and the benefits they bring. Taken together, both houses of Parliament bought almost as many iPads as HMRC: 34 for the Lords, 96 for the Commons (the devices were given to both MPs and parliamentary staff.)

At the start of the year, Joan Miller, head of government agency PICT, which provides IT to both Lords and Commons, said the organisation had totted up the costs of iPads versus printing. It found that one department had saved £2,000 on printing costs since the introduction of the scheme.

"Even if I replace iPads twice a year, it's cheaper than our encrypted laptops," she said.

But even these three examples of iPad enthusiasm represent a very small proportion of headcount actually with a device – in the case of parliament (taking in members in both houses, as well as parliamentary staff), there's around one iPad per 50 members of staff; for DoH, it's a similar figure; and for HMRC, one in 500.

While not every civil servant will need, or indeed want, an iPad or other tablet, the relatively low penetration of the devices in the public sector seems at odds with a parliament that has actively embraced technology and digital delivery more than its predecessors.

Andrew Miller is chairman of Pictfor (the parliamentary internet communications and technology forum) and member of a select committee that's currently trialling iPads. He believes Apple tablets and tablets in general have yet to find a foothold in the public sector due to a number of factors, including the difficulty many departments have in finding the cash to finance a rollout, as well as issues around data sovereignty. 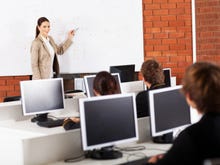 The UK government is giving £1m to smart graduates to entice them to become comp sci teachers and is setting up high-tech apprenticeships at its spy agencies in hopes of overcoming the IT skills shortage.

"To make the most out of an iPad, one would ideally want to use iCloud, and iCloud is governed by American, not British, law. The servers reside in the US and any data in iCloud is subject to the Patriot Act. If Apple wants to increase its penetration among national government customers, then it needs to place some servers in the UK," he said.

There may however be a more significant, more obvious reason behind the lack of tablet penetration – a general reluctance to push for new tools, and new ways of working that can go with them.

"There is a general inertia in the public sector to accept new ways of doing things. We are all 'small-c' conservatives and don't like changing the way we do things," Miller said.

"It is quite significant the way tools like the iPad impact on the way you do the job," he added. "Over the last six to eight years there's been a gradual transformation [in technology], there's been some people in CIO posts that are rattling cages and trying to move things on, but they're doing so against this general inertia that creates a resistance."

There are signs, however, that the tablet inertia's days are numbered. Central government does appear to be acknowledging the existence of, and need for, tablets – if not actually getting to the stage of getting its wallet out. An IT hardware framework deal handed out by the public sector's buying arm the Government Procurement Service earlier this year expressly stipulated tablets alongside the usual laptops, desktops, printers and peripherals.

That doesn't translate into good news for Apple, of course: it's not on the framework deal, nor is it the type of company to bid to be on one - leaving the Whitehall tablet market in the hands of Lenovo and Fujitsu for the foreseeable future.

Join Discussion for: iPad inertia: Does Apple's tablet have a...