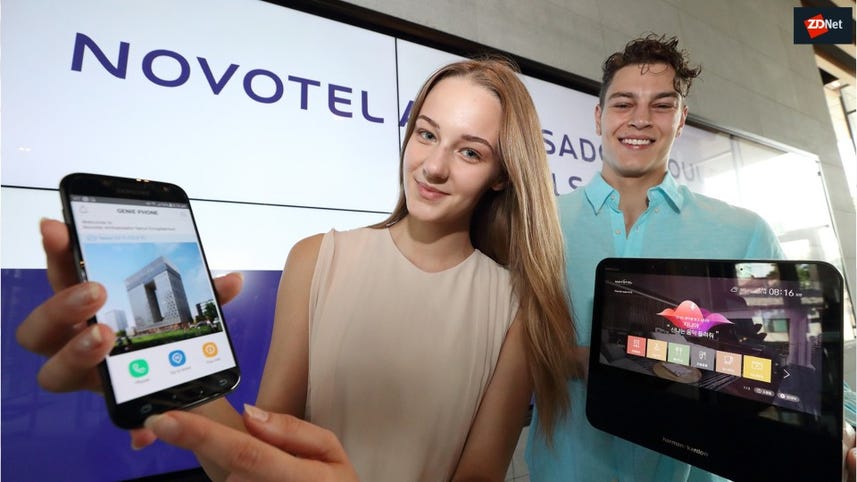 KT has applied its artificial intelligence (AI) assistant to a hotel in South Korea with English language support to accommodate foreign visitors, the telco said.

The company's Giga Genie has been applied at the Novotel Ambassador Hotel & Residence at Dongdaemun, Seoul, which was newly opened on July 3.

Guests can use voice commands in their rooms using the provided touch screen device to control lighting, AC, TVs, music, and to order hotel products.

They can lie on their beds and give commands instead of using remote controls or wall pads, the telco stressed.

KT said it will add concierge features that will allow guests to check out of their rooms and pay for their mini bar or room services just through voice commands.

Foreign visitors booked for a stay can also receive a Genie Phone given to them in the airport. They can use the rental phone as a transportation card, or to make calls, control their rooms at Novotel, and get tax refund services.

KT said it will later add other foreign languages besides English.

The telco is also providing its visual security solution Gigaeyes, which monitors visitors and checks for fires. It has also supplied KT-MEG energy, which analyses electricity use and configures it to save costs.

KT will said it will expand Giga Genie to three more hotels by 2020.

Last month, the company unveiled its airship drone dubbed Skyship Platform for use in rescue missions.

It is planning to roll out 5G networks with compatriots SK Telecom and LG Uplus next year in March.

Defending its latest round of hiring from academia, Facebook said it's hiring in the field robotics in part because that's where the talent is.

The new Xeye camera, which uses Intel Movidius VPUs, is one of multiple products from the Chinese search engine giant that leverages Intel's AI technology.

Echo Look's first mission is to give you wardrobe tips and get you to buy clothes. The second mission, popularizing computer vision and enabling Alexa to see, will have a far bigger impact.

Marriott International will be trialing the biometric feature at two Chinese hotels, possible expanding it globally.

The hotel chain said it will roll out the mobile-centric room style in 2018. Guests will be able to pre-set room preferences, like temperature and lighting.

61% of businesses have already implemented AI(TechRepublic)

Adoption of artificial intelligence grew 60% in the past year alone, according to Narrative Science.