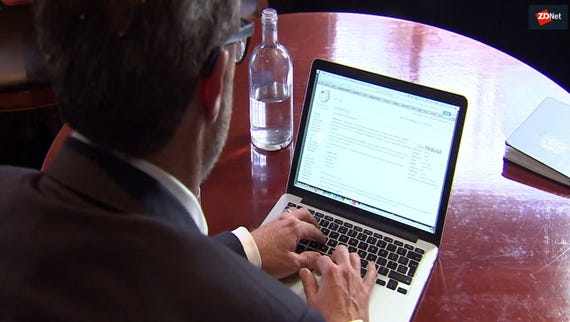 Business professionals have a huge amount of choice when it comes to computing. From Apple's recently refreshed iPad Pro to Microsoft's hybrid Surface Book, modern employees no longer rely on laptops to stay productive on the go. We speak to five executives about their personal preferences and present five best practice tips for effective mobile computing.

1. Focus on the service, not the device

Camden Council interim CIO Omid Shiraji believes the choice between laptop or tablet is less important than giving people the technology they need to meet their objectives. "I don't care about the device, both personally and organisationally - give the people the tools they need to do their jobs," he says.

Shiraji says the council does, however, have a clear mobile strategy. "We provide everyone in Camden with a laptop and we're exploring how, as part of our end-user device strategy, hybrids might become the default option. We have iPads and smartphones out on the estate, too," he says.

Camden is currently evaluating a range of hybrid technologies, including touchscreen devices with detachable keyboards. "That would give us the best of both worlds," says Shiraji. "But - just as we would for citizens - we have to aim for all of our services for employees to be available on any platform."

Once again, he reiterates that organisations need, as much as possible to move away from prescriptive approaches to device selection. "CIOs need to think about re-engineering the services so that they're available on any device," he says. "What I care about is the service and providing access to that service in the way that's most convenient for users."

Martin Draper, technology director at luxury retailer Liberty, is a big Apple user but he prefers his laptop to his tablet. "I have a MacBook, which I love, and an iPhone, which I also love, but I only use my iPad to control other devices," he says. "I don't really use it as an everyday tool, like my iPhone and MacBook."

When it comes to the business environment, Draper says personal preferences also matter but should not be the only factor. "The choice of device should be related to the problem you're trying to solve," he says.

"I get frustrated by users who still think of the IT department as a shop and who demand an iPhone or a MacBook. That's not what a CIO should offer as a service. What I offer is the opportunity for the user to define their problem and for me and my team to come up with the best solution given the business constraints we face."

Draper says the one device he could not live without is his Kindle - and that relationship is all about splendid isolation. "I can't do anything on that device but read a book - and I really like the fact that there's no distractions, such as internet or email," he says.

3. Use of tablets must be role-based

IT leadership consultant Andrew Abboud, who was previously CIO at Laureate Education, speaks with ZDNet at the Institute of Directors in central London. Next to his coffee sits a 12.9 inch iPad Pro with an attached keyboard. Abboud uses an iMac at home. But when he is out and about, the tablet is his device of choice.

"It's portable, powerful and I live in an apps-based world," he says. "I might need a more powerful device if I'm putting together a fancy presentation or a complex spreadsheet. But I use my iPad Pro more than any other device."

Abboud refers to some of his favourite apps. As well as Apple's mobile productivity tools, he uses Slack for collaboration and Pocket to curate the content he finds into a themed and tagged knowledge base that includes thousands of reference articles. "I couldn't work without some of these apps," he says. "I could do some of this stuff on a laptop but it's easier to save, find and access resources through a tablet."

Abboud recognises, however, that not everyone will feel the same. "The use of tablets in the business must be role-based," he says. "As CIO at Laureate, I helped our executives to find ways to make use of tablets, social tools and apps. For the right person, the tablet can be a genuine replacement for the laptop. In the end, this is the age of the app."

4. Make sure other departments do not make IT decisions in isolation

Peter Markey, who has recently been appointed marketing director at TBS Bank, is another executive with a strong personal preference. "I still like a laptop. I can touch-type, so I love to have a proper keyboard in front of me," he says.

"As a power user, I also like being able to work with applications like Excel and PowerPoint on a laptop. I find it much easier to use those tools on a laptop, rather than having to edit stuff on a tablet."

Evidence suggests marketing teams run by executives like Markey are increasingly making their own IT purchasing decisions. Analyst Gartner's latest figures show that marketing chiefs spend 27 percent of their budget on technology, equal to 3.24 percent of overall company revenue.

However, Markey believes a strong technology department still plays a crucial role. He refers to his former role as CMO of Aviva and says the organisation benefiting from having access to a "brilliant" technology team. "Business decisions on technology must be related to contexts and personal preferences," he says.

5. Find ways to manage the complexity

Jonathan Mitchell, non-executive director at Harvey Nash and former CIO at Rolls Royce, describes himself as a "tablet man". He uses an iPad with an attached keyboard. "It's light and I can do everything I need to on the device," he says.

Mitchell says the ever-growing importance of consumer spending on IT is helping to make technology knowledge ubiquitous. He believes people tend to use devices that feel familiar, regardless of operating system. "The younger generation, in particular, are much more agnostic in terms of the technology they use," says Mitchell.

This uncertainty presents a challenge for CIOs. As more devices bombard the business, IT leaders are searching for ways to maintain information integrity and boost customer experience. Mitchell says technology chiefs must manage the complexity and issues an interesting piece of best practice advice to CIO peers.

"I always made sure as an IT leader that I used the oldest hardware on the estate that I was managing as a CIO, so I could feel the pain of my users," he says. "It sounds counter-cultural, because technology people tend to have the latest and greatest tools, but working in that way helped me understand the issues my people faced."

Join Discussion for: Laptop, tablet or hybrid: Which devices do...