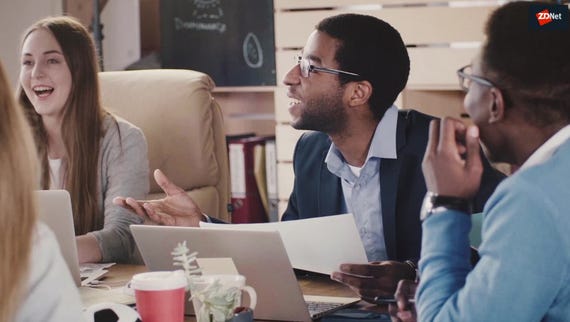 IT leaders have more choices than ever before when it comes to equipping their staff. So, which devices are best for maximising productivity in and out of the office? Four CIOs give their best-practice advice on how to choose the right mix of laptops, smartphones, tablets and other hardware.

1. Don't be too prescriptive

Gideon Kay, European CIO at Dentsu Aegis Network, says companies and users often have access to too many devices. He believes most business will probably be in a better place when mobile strategies mature and rationalisation occurs. With this in mind, his philosophy on device choice is to not be too prescriptive.

"Treat people like adults and they'll do the same with you," he says. "I'd like to believe we're getting to the situation where it's all about using what device works best for you as an individual, not what I -- as a CIO -- can force you to use. We want to get more into BYOD as an organisation, too, and we're building the security architecture to do that."

He is keen to avoid getting into a debate about the various strengths and weaknesses of, for example, Windows and Mac OS. "They have different total costs of ownerships, different user experiences and people have different preferences," he says.

"If you recruit an employee who's worked with a Mac all their life, and you tell them they'll have to use Windows, then you will take a huge hit on productivity when that individual enters your organisation during the first three to four months. It's important you support choice. We've been very successful when using Microsoft Surface devices, but we've also been very successful at implementing MacBooks."

Richard Corbridge, chief digital and information officer at Leeds Teaching Hospitals NHS Trust, says the choice of device in his organisation depends on the task being completed. "What we've seen work best is to offer a choice to clinicians," he says.

"With nurses, it's best to make them truly mobile, so smartphones or an iPod touch work well for nursing staff. These devices are less intrusive and don't get in the way of the conversation with patients; nursing staff can hold the device in one hand."

Corbridge and his team work closely with senior clinicians to ensure technology spending decisions meet both business and patient requirements. There are 16 mobile devices on each ward in Leeds and a series of computers and laptops on wheels.

"We've now decided to go down the route of delivering nursing observations on mobile devices," he says. "Nurses at the bedside -- with a smartphone, iPod touch or a tablet -- will take the observations of a patient and feed those into the electronic healthcare record. That means everyone who's delivering care to the patient can see the observations in near real-time across the system."

Making sure this technology continues to meet the demands of staff is critical. "There's a lot of kit -- but if you create clinical engagement and don't deliver what people will require, then all you do is disengage staff and annoy people," says Corbridge.

3. Match the connection requirements of employees

Ian Cohen, global CIO at transport specialist Addison Lee, believes the choice of hardware is less important than the selection of software. When it comes to tools and applications, businesses must ensure their devices match the connection requirements of their workers.

"I still think the user experience is crucial -- and it's about providing something that's right for the individual," says Cohen. "Technology departments must make sure they are providing the most optimal computing environment for their colleagues based on the state they're in -- whether that's fully connected, occasionally connected or entirely remote."

Cohen says CIOs often choose to provide technology that mirrors these three states. However, people rarely operate in any one state exclusively. He says a laptop or a desktop is at its best when it's in a connected state. Tablets and smart phones, meanwhile, are better in an occasionally connected state. Solving the challenges of working across a variety of connected states falls to software.

"If you invest in Google as your platform of choice, for example, then you make an assessment about working online and offline using Google Docs," he says. "The Microsoft fraternity will make a similar call based on the features of Office 365. Once you have the software to support the way you want to work, then your choice of device comes down to personal ergonomic preferences."

4. Focus solely on the business case

Chris Ashworth, CIO at logistics specialist Hermes, says the technology he implements in the business is simply a tool to allow workers to complete their tasks. "It absolutely depends on the use case," he says. "We've got MacBooks, Windows laptops and I have my own personal preferences -- but we're never prescriptive."

Some interesting use cases do exist. Take sales staff, for example -- Ashworth has found high-quality devices can help boost customer perceptions of Hermes. "We have lots of technology conversations with our clients and we've found they expect our sales people to come with the latest laptops," he says. "When we do that, it creates a view of us being an innovative, cutting-edge company."

Hermes also needs to provide handheld mobile connectivity to its team of couriers. The firm has traditionally given PDAs to these end users. However, the firm is currently embracing a new approach and is testing a specially designed app for couriers. Ashworth says this use of apps is being accompanied by a move toward smartphones. So far, the business case for this shift is strong; smartphones used by couriers tend to get broken less than its traditional handheld terminals because they're easier to use and maintain. Cost is important too; a ruggedized PDA costs upwards of £700.

IT strategy: How to talk to the boss about your great ideas

CIO strategies: How should CIOs keep CEOs briefed about developments in technology?

The retail giant was reportedly taking a page out of IBM's playbook, expecting lower IT support costs for Macs. Not so, says Walmart.

Cloud computing: Five ways to make the most of the move to on-demand

Cloud computing can't fix everything but it can be a key element of business transformation if handled well.