While it was announced back in August, Lenovo's Tab P11 Pro tablet is finally available to order from the company. With a starting price of $499.99, the Android 10 slate is positioned to compete in the midrange market with the likes of Samsung's Galaxy Tab units.

With its 11.5-inch OLED display, the Tab P11 Pro offers a slightly larger screen than the 10.5-inch Galaxy Tab S6 and S5e, albeit with the same 2,560x1,600 display. Its Qualcomm Snapdragon 730G octa-core processor slots it between those two Tab models, slower than the S6's Snapdragon 855 but faster than the S5e's Snapdragon 670. The base P11 Pro comes with 4GB of memory and 128GB of onboard storage, but you can upgrade to a version with 6GB of RAM for $50 more. 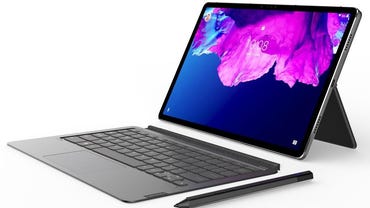 Speaking of pricing, the P11 Pro would seem to undercut the Tab S6, which is listed at $649.99. However, that price gap is complicated by a couple of factors. First, the Tab S6's price includes the highly regarded S Pen digital stylus, whereas Lenovo's equivalent Precision Pen is a $65 optional accessory. (A wireless keyboard is an option for both Lenovo and Samsung tablets.) Though that still makes the Lenovo cheaper than the S6 list price, that original price isn't necessarily reflected in current pricing

Perhaps in anticipation of P11 Pro's launch (or in the spirit of holiday shopping discounts), Samsung is currently selling the S6 for just $479.99 through its online store. In other words, you can get a tablet with a more powerful processor, an additional 2GB of RAM, and a digital pen for less than the base P11 Pro price.

Lenovo may be banking on its new tablet's bigger screen and its just-released status to counter, but it will be interesting to see if it will be necessary for the P11 Pro to receive its own price cut to stay competitive.