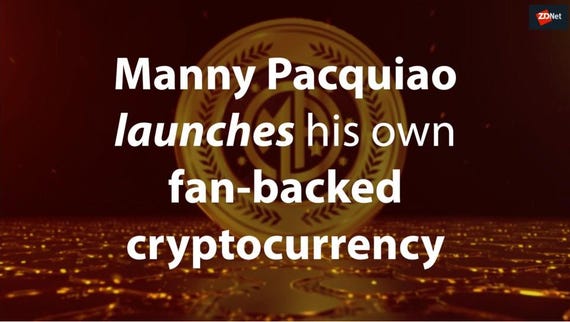 Champion boxer Manny Pacquiao announced the launch of his own cryptocurrency at a concert in Manila on Sunday.

The cryptocurrency, called the Pac, will allow fans to buy merchandise and interact with Pacquiao -- the 40-year old boxer, Filipino Senator, and former basketball player -- via social media.

The Pac behaves like a normal cryptocurrency in the sense that it provides a digitally tradeable token with a floating value secured by a decentralised ledger. But unlike other cryptocurrencies such as Bitcoin, the value of the Pac is touted as being backed by demand from Pacquiao's fan base for his merchandise.

The Pac token will be listed on the Global Crypto Offering Exchange (GCOX), a crypto-exchange based in Singapore that specialises in developing celebrity tokens.

"GCOX helps celebrities leverage their popularity like never before by creating their own exclusive, personalised crypto, known as Celebrity Tokens. Through exclusive products, services, and social interactions, GCOX revolutionises the way celebrities interact with their fans, giving the public unparallelled access to celebrities." the company said in a blog post.

The Pac can only be used to purchase goods within programs supported by Pacquiao's digital payment system "Pacpay", which only supports the purchase of Pacquiao merchandise.

Previous celebrity-backed cryptocurrency ventures have been unsuccessful so far, with boxer Floyd Mayweather and music producer DJ Khaled being charged last year by the US Securities and Exchange Commission (SEC) for failing to disclose that they were paid to promote a cryptocurrency called CentraCoin.

Mayweather received $100,000 to promote the digital token by saying on social media: "Get yours before they sell out, I got mine". Khaled, meanwhile, called CentraCoin a "game changer" on Twitter for $50,000.

The company behind CentraCoin was eventually charged by the SEC as the entire scheme was deemed fraudulent.

Pacquiao is the first celebrity to launch a cryptocurrency that uses fans to directly prop up the value of the currency. Other celebrities such as singer Jason Derulo, tennis star Caroline Wozniacki, and former soccer player Michael Owen are reportedly set to launch their own celebrity tokens later this year.

The Ukrainian Secret Service is investigating the incident as a potential security breach.

If you've been trading but not declaring, the tax service might be on your case.

The platform will be designed to prevent money laundering currently made possible through virtual assets.

Facebook's history of mishandling data has come back to haunt it as the privacy and regulatory community team up to probe the social media giant on Libra.

Facebook has announced plans to start a cryptocurrency for online payments. Tom Merritt lists five things you should know about Libra.

Join Discussion for: Manny Pacquiao launches his own fan-backed...