Full Bio
Posted in All About Microsoft on September 21, 2016 | Topic: Cloud

Microsoft is making an early version of its Azure Blockchain as a Service middleware available to customers as of this week.

Codenamed Project Bletchley, that fabric is meant to provide some of the missing pieces that business users might need before they start using blockchain applications. 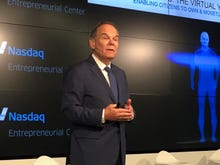 Blockchain: Over-hyped bandwagon or truly revolutionary technology? Silicon Valley is hot on blockchain -- the technology behind the Bitcoin cryptocurrency -- and its many potrential uses.Blockchain's economic impact could be as important as the Internet

Blockchain is the technology that underpins the cryptocurrency Bitcoin. But it has uses beyond that. A blockchain is a shared, distributed ledger that can store the complete transaction history of not just cryptocurrency but other kinds of records. As such, it's of interest to many enterprises, especially those in banking and finance.

Microsoft initially launched Azure Blockchain as a Service in November 2015. In June, Microsoft made a white paper about Bletchley available.

On Sept. 20, Microsoft announced the release of Bletchley v1, which is a blockchain template -- accessible via the Azure Resource Manager -- aimed at helping customers and partners create private consortium Ethereum networks. Microsoft is claiming the template reduces the estimated three-week process of setting up a globally distributed multi-node consortium Ethereum network down to eight questions and five to eight minutes.

A walk-through of the new template is here.

"At a high level, the template provisions and configures a subnet of mining nodes for each consortium member and a set of load-balanced transaction nodes that members can share to communicate with the network. Through the administrator web page, you can configure additional Ethereum accounts to get started with smart contract and eventually application development," explained company officials in a Sept. 20 blog post.

"Cryptlets" are a key building block of Bletchley. Bletchley's Cryptlet Fabric is comprised of Cryptlets and provide developers with the ability to integrate with existing systems, provide secure execution, and deliver data privacy, Microsoft officials explained in a blog post on Bletchley v.1.

In a deep dive post, Microsoft officials described Cryptlets as similar to blockchain oracles, but said Cryptlets will "provide much more in the way of security and trust in a scalable ecosystem".