Microsoft announced yesterday that it will be opening its third IoT & AI (Internet of Things and artificial intelligence) Insiders Lab. The new lab, located in Munich, Germany is set to open in April and will provide an EMEA point of presence to round out the existing labs in the Americas (Redmond, Wash.) and Asia (Shenzhen, China).

Mission possible
The mission of the labs is to provide facilities and expertise to startups in the IoT and AI arenas. The labs offer facilities that include a laser cutter, a reflow oven and 3D printers, along with staff sporting expertise in IoT hardware, embedded systems software, cloud engineering, and, of course, IoT, machine learning, and AI. Companies can apply to use the lab and, if accepted, are scheduled for one- to three-week sprints, designed to get them unblocked, past the prototype stage, and ready to go to market.

The goal is, of course, a combination of stoking the AI and IoT ecosystems while they are still in their fledgling stages, and of evangelizing Microsoft IoT and AI technologies to startups in the space. This conforms to Microsoft's efforts to become a leader in the cloud and machine learning arenas, and its historical partner-focused orientation.

Stacking up
In its public relations materials on the Insider Labs, Microsoft refers to helping its customers by providing "full stack" expertise in the IoT and AI arenas. A "stack" is an old software industry term used to describe a collection of products and technologies, vertically integrated (or "stacked"), that include everything from low-level operating environments and libraries to higher level facilities, tools, and development kits.

While the industry is used to hearing the term "full stack" in the context of, say, web development, its application to AI and IoT is a relatively recent phenomenon. It's not unjustified though. Consider the following relevant Azure services that Microsoft offers:

All of the above services facilitate IoT and AI offerings, by processing the streaming data that comes out of IoT devices and building machine learning models from the IoT data and/or against which such data can be scored. The industrial use cases for this are broad-ranging, including preventive maintenance, network optimization, healthcare, and customer analytics.

Hybrid cloud
In addition to the cloud services above, the following Microsoft technologies are also relevant to IoT and AI:

Most of the above technologies can be used both on premises and in the cloud. APS is used exclusively on-prem, but the combination of Azure SQL Data Warehouse and HDInsight offer equivalent functionality. Azure Analysis Services is currently available in preview; and Power BI has both desktop and cloud service components.

The computer is the network
The CNTK provides an array of neural-network based deep learning algorithms, against which models can be trained and tested. The models can then be used to score new data; in other words, they can be used for predictive analytics. The CNTK scales across clusters of servers and can take great advantage of graphical processing units (GPUs), as well as conventional CPUs, as it processes huge datasets. The CNTK can be invoked from Python and C++ code as well as the CNTK's native BrainScript language .

CNTK is somewhat analogous to Google's TensorFlow, although Microsoft says CNTK outperforms TensorFlow, in terms of training time, by significant margins. Both are open source, but they are available under different licenses, .

Promote, evangelize, teach
With all of this technology, not to mention Windows 10 IoT Core and its version for Raspberry Pi 2, Microsoft does offer a bona fide stack for IoT and AI development. That so much of the stack is so new, and given its integration with the Azure cloud and the ancillary services offered there (including raw compute and storage), there's a lot of educating and evangelizing to do.

Microsoft needs to push on the education/evangelism front, not only to drive adoption of the IoT/AI stack itself, but to shore up Microsoft's own performance, perception, and success as a cloud computing company. And given that so many of the potential adopters of the stack are resource-constrained startups, still grappling with bleeding edge technologies, these brick and mortar labs seem like the right way go.

Decision 2017
Much as in a political campaign, Microsoft needs to get out there, press the flesh with its constituents, establish trust, win hearts and minds, and get out the vote. Microsoft can't just phone it in and, just like a political favorite, it can't take its base for granted or it might lose in an upset.

But unlike in politics, Microsoft can't use fake news, or anything like it, to win. Only concrete adoption, massive spot and reserved usage of services, signed Enterprise agreements and recognition as an industry-standard provider will bring victory.

With that in mind, Microsoft might do well to open additional IoT & AI Insider Labs, and soon. 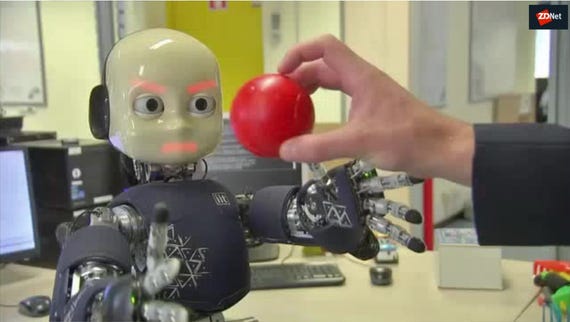