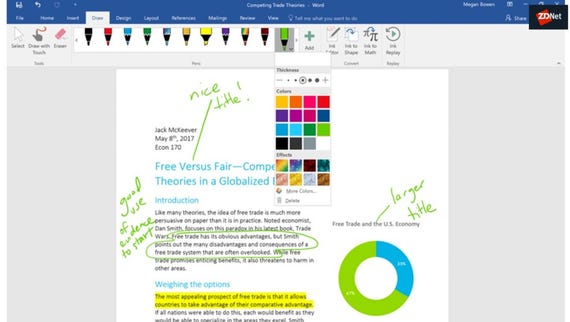 Video: Microsoft made a collaborative inking Whiteboard app for Windows 10

Microsoft is making available on Dec. 5 its Whiteboard collaboration app as a public preview.

Microsoft's Whiteboard app, which company officials describe as a "limitless canvas" that supports inking and collaboration, has been in private preview for the past few months.

The concept of the Microsoft Whiteboard app is to enable collaboration across multiple Windows 10 devices. Users can see where others are on the board and the updates they are making in realtime.

The app works on Windows 10 devices and supports real-time collaboration for Office 365 subscribers. It also lets users add local or web photos that they can turn into "stacks", do Bing web searches, and use the Whiteboard switcher to access different boards.

The public preview of Microsoft Whiteboard is available from the Microsoft App Store for all English versions of Windows 10 as of today. Support for other languages is going to be available "in the coming months." To use the app, which is free, one participant in a collaborative session must have an Office 365 personal, work, or school account.

Join Discussion for: Microsoft opens up its Windows 10 Whiteboard...