Microsoft's "everything as a service" push is continuing, with its System Center Configuration Manager the next product to get the treatment.

In a couple of October 27 blog posts, Microsoft officials outlined the company's plans to turn Configuration Manager into a regularly updated service, with Microsoft pushing new features to users at more rapid and regular intervals.

Microsoft officials signaled earlier this year that the company would be moving toward more of a service-centric Windows and device management model as it made available more pieces of its promised "Windows Update for Business."

"Over the past three months, you have seen us release a steady stream of Technical Previews - culminating most recently in our 1510 update (more details are here). During this time, we have completed the work necessary to deliver ConfigMgr more as an 'as-a-Service" product. Going forward, we will release frequent updates to ConfigMgr - and these updates will be denoted with a year and a month, i.e. YYMM." 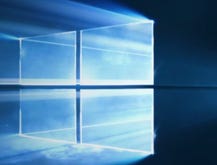 Microsoft's Windows 10: Business users may get patch details after all Microsoft looks to be rethinking its stance against providing detailed Windows 10 patch and update information, at least for business customers.

Anderson said Microsoft took the first steps on this path with its work around turning Intune and ConfigMgr 2012/R2 into a hybrid offering. With the next Configuration Manager release, Microsoft will be able to " update Intune and within a very short period of time have all those changes that were made in Intune be exposed via the hybrid solution within ConfigMgr," he said.

As Microsoft officials said back in May, Microsoft is still planning to release a new version of Configuration Manager by the end of calendar 2015 that will bring full support for deploying, upgrading and managing Windows 10. The plan is to enable Configuration Manager, in the future, to also help manage Apple iOS and Android devices, as well, thanks to its Intune integration.

Microsoft plans to support each version/update of Configuration Manager for 12 months before the company requires customers to move to the latest version in order to continue receiving support.

Microsoft announced its planned changes to its Office updating and servicing model in September 2015. Microsoft officials have been talking up Windows 10 as being a "service," rather than a product, for more than a year.