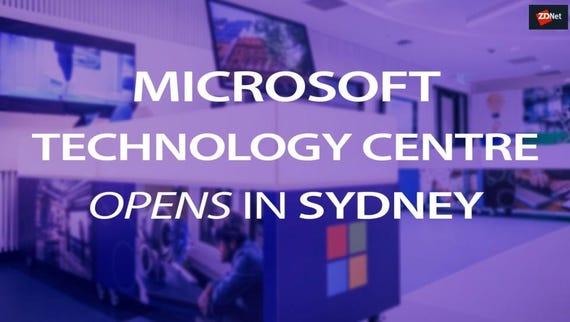 Microsoft has opened a new technology centre in Sydney, with the idea to work with Australian organisations to accelerate digital transformation, focusing specifically on the impact that cloud and artificial intelligence (AI) can make in both the public and private sectors.

The multimillion-dollar "state-of-the-art" Microsoft Technology Centre (MTC), officially launched on Tuesday, offers visitors access to explore digital opportunities through an envisioning theatre, an exploration showcase where Microsoft and partner solutions are demonstrated, an innovation factory, a social hub, and a cybersecurity room, as well as workshop and boardroom areas.

The MTC will be staffed by seven of the company's staff members, comprised of a director, five technical architects, and a technology manager.

"This is a significant and important investment by Microsoft in the Australian market," Microsoft Australia managing director Steven Worrall said. "The Microsoft Technology Centre will help our customers accelerate their digital journeys by bringing together the right resources -- people and technology -- in one location to demonstrate what can be achieved in their organisation and then to work with them to bring that to life."

"The reason that this is important to us is because it's important for Australia as a country," Worrall told journalists during the MTC launch.

"Technology permeates every part of the Australian economy, it has changed the way in which governments operate, it's changing the way in which companies large and small across Australia are operating, it's changing the way in which industries around the world are operating, and so the thought that we as a nation are having enjoyed this wonderful period of prosperity to get to this point need to be very thoughtful about how we go forward, and for us at Microsoft, investing in Australia's future is a big part of the role that we feel we can play."

While Worrall believes the launch of the MTC is evidence of that commitment, he also pointed to the handful of announcements Microsoft has made in Australia over the past 24 months, including the launch of two new Azure data centre regions in Canberra to support national critical computing, as well as opening the Microsoft Reactor in the Sydney StartUp Hub to support local startups.

Also announced during the MTC launch was a five-year deal with IT services firm DXC Technology, which will see the companies transition DXC's and Microsoft's enterprise and public sector clients in Australia to the Microsoft Azure cloud.

Redmond now has a spot on the Certified Cloud Services List, allowing the company to store highly classified government information on Azure and Office 365 in Australia.

Microsoft plans to deliver Microsoft Azure for government use out of two new regions located within Canberra Data Centres in the nation's capital.

This comprehensive guide about Microsoft Azure includes common use cases, technical limitations, and what to know before adopting the cloud computing platform.