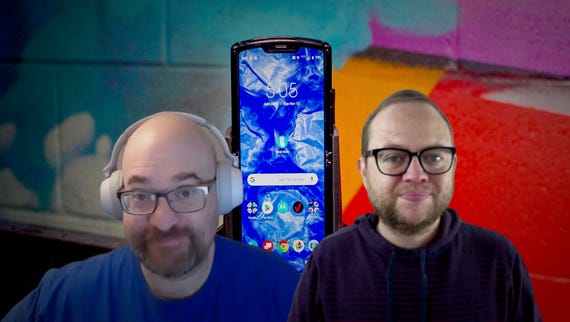 The Motorola Razr is back and looks better than ever. But is it worth $1,500?
Watch Now

I'm in Los Angeles for Motorola's Razr event, and I have to say it's probably the weirdest tech announcement I'll ever attend. There wasn't truly an announcement, actually. A DJ played music for about thirty minutes, then a Motorola and a Verizon executive took the stage to tell everyone how excited they are to work together on the first foldable phone on Verizon's network. Then the DJ returned and played music for another 30 minutes, when a garage door behind the crowd opened, revealing the hands on area.

There wasn't a formal announcement. No one ran through the design decisions, specifications or features. It was simply: Go in that room over there and check out the new Razr. Heck, no one even told us that the garage door that had opened even lead to the hands on area. We kind of had to figure it out on our own.

So that's exactly what I did.

I was certain the clamshell design of the Razr wouldn't lend itself to a foldable display, especially considering that Motorola chose to keep the same folding method as the beloved Razr. But once I opened the Razr, it looked and felt a lot like a normal smartphone. The 21:9 display ratio is taller than most phones, but it doesn't feel like a huge stretch when tapping through apps or scrolling a website.

There's a fingerprint sensor just below the display, centered on a sizable bezel, or I guess it's more like a chin.

With the Razr closed, the rear-facing camera actually becomes the front-facing camera that you can use to take selfies on the front display. You activate it with the same wrist twist that Motorola has used on its phones for years. A quick double twist, like you're opening a door, and the camera launches. If you decide you'd rather open the phone and use it more like a regular camera, you only have to flip it open and the full camera app is already running and ready for action.

On the right side of the phone are the volume keys and the power button. On the bottom is a USB-C port -- there isn't a headphone jack, but a USB-C to 3.5mm adapter is included in the box.

A smart approach to a foldable phone

Where the Galaxy Fold and Mate X open more like a book, maximizing screen space and productivity, the Razr minimizes itself. You can triage messages and notifications on the front screen on a device that's half the size of your smartphone, or open it up and use it just as you would your Pixel 4 or iPhone. It's genius.

While other companies are trying to figure out what to do with a foldable screen -- how to maximize productivity, create new workflows, and take full advantage of multiple apps -- Motorola is testing its foldable display tech in a form factor that's familiar.

I've had a chance to briefly play with a Galaxy Fold, and I was impressed but also sort of intimidated. The moment I picked up the new Razr, I felt as if I was using a normal smartphone. Then I closed it, and that familiar feeling of a flip phone came back. Then I opened it and, again, I was using a smartphone. I didn't have to make any decisions of which app to open where, or how many apps I should have open as I feel like Galaxy Fold users would.

The hinge felt sturdy, and wasn't too easy or hard to manipulate. There was even that familiar snap as you close the phone, be it because you're done answering emails or just hung up on a call.

The new Razr uses Qualcomm's Snapdragon 710 processor, instead of the 855 or 855+. In my brief time with it, apps opened fast and there wasn't any stuttering while scrolling, but I wonder what performance will be like after a few days of normal use with a full slate of apps.

I also wonder what battery life will be like. With a 2510 milliamp-hour battery powering a 6.2-inch display and a 2.7-inch display, I'm not hopeful that it will last a full day of heavy use. I'd love to be wrong, though.

And then there's the foldable display itself. When looking at the display as I folded the phone close, I could see a small gap between the screen and the phone's housing just before it fully closed. If you recall what happened with the Galaxy Fold, debris getting underneath the display caused a lot of problems. So many, Samsung delayed its launch. I'd wager that these are pre-production devices and those finer details will surely be worked out by the time the phone launches in January of next year.

I haven't been truly excited about phones with foldable displays. I've felt like there's still a lot of issues and ideas that need to be figured out before the Galaxy Fold's of the world make sense. But, for me, the Razr makes sense, and now I'm excited to see what more companies do with foldable display technology.