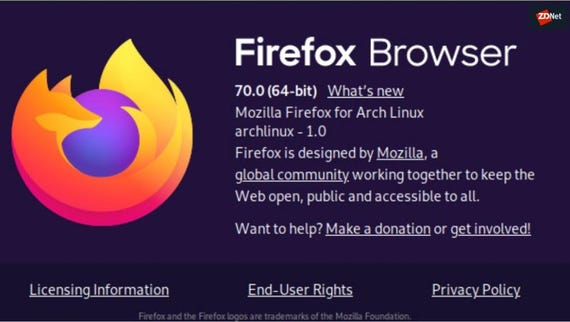 Mozilla has released Firefox 70, introducing new security indicators for HTTP and HTTPS sites, and a new privacy report that shows how many times its Enhanced Tracking Protection has blocked third-party tracking cookies, fingerprinting, and browser-based cryptominers.

Mozilla says Firefox has blocked over 450 billion third-party tracking requests since July, with the number rising sharply after Firefox 69 was released last month, which enabled tracking protection by default.

Firefox 70 offers users some insight into how frequent online tracking occurs in its new privacy report, which is accessible by clicking the browser's new shield icon next to the HTTPS padlock icon, and scrolling down to Show Report.

If Firefox users want to see which specific advertising firms are tracking them across sites, they can click on the shield icon and scroll down to "Blocked" and check which social media and third-party ad cookies are currently being blocked on a site.

Firefox users can view how many social-media trackers, cross-site tracking cookies, fingerprinting scripts, and cryptominers the browser has blocked each day during the past week.

Firefox doesn't play the competitive role it once served against Microsoft's Internet Explorer. However, Mozilla believes its anti-tracking technology and individual privacy reports can counter the ad industry's misleading and confusing tracking consent forms, ostensibly adopted as part of a push for greater transparency.

"The solutions put forth by other tech companies and the ad industry provide the illusion of choice," argues Mozilla.

Mozilla's tracking blocking efforts have resulted in each instance of the Firefox browser blocking 175 tracking domains per day, which it argues users would be overwhelmed by if they had to manage consent for each site. Additionally, the forms use so-called 'dark patterns' to trick users into giving consent, it argues.

The Firefox privacy report also offers a snapshot of any data breaches the user may have been affected by via the Firefox Monitor breach-alert service. And users can also access the Firefox Lockwise password manager, which allows users to sync passwords across Firefox on the desktop to Firefox on iOS and Android, and can now generate complex passwords.

Firefox 70 also introduces streamlined security indicators for HTTPS and HTTP sites. HTTPS sites now display a grey padlock icon, while all HTTP sites have a padlock with a red strike-through to indicate a connection over an insecure protocol.

The browser no longer displays the name of the company if they have used an Extended Validation (EV) SSL certificate. This information is now available by clicking the shield icon.

Additionally, this release includes performance improvements for Firefox on macOS that Mozilla claims can reduce power consumer and speed up page loads by up to 22%.

Finally, the update addresses 14 security CVEs, including a set of critical memory safety bugs that could be exploited to run arbitrary code.

More on Mozilla and its Firefox browser

Join Discussion for: Mozilla's Firefox 70 is out: Privacy reports...