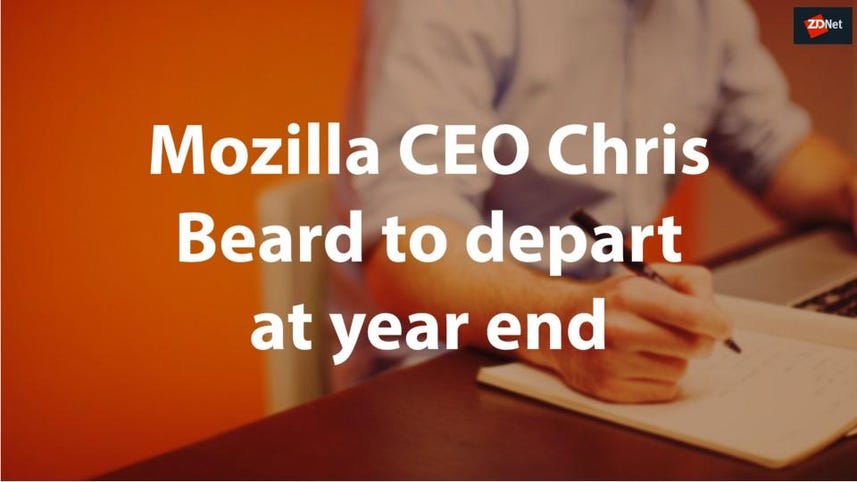 Firefox browser creator Mozilla is back on the hunt for a CEO, with Chris Beard announcing he will depart Mozilla Corporation at the end of the year.

Beard took on the CEO mantle in July 2014, after serving as interim CEO following a nine-day stint by Brendan Eich as CEO.

Eich left Mozilla after it resurfaced that he had donated to a campaign seeking to ban same-sex marriage in 2008.

Beard said on Thursday that he would remain an advisor to Mozilla after serving a "gratifying tour of duty".

"When I returned to Mozilla just over five years ago, it was during a particularly tumultuous time in our history. Looking back it's amazing to reflect on how far we've come, and I am so incredibly proud of all that our teams have accomplished over the years," Beard said.

If needed, Beard said executive chair Mitchell Baker would step in as interim CEO if the search for a replacement went past his exit date.

In a separate post, Baker thanked Beard for putting Mozilla on a new and better path.

"This includes reinvigorating our flagship web browser Firefox to be once again a best-in-class product. It includes recharging our focus on meeting the online security and privacy needs facing people today," Baker said.

"And it includes expanding our product offerings beyond the browser to include a suite of privacy and security-focused products and services from Facebook Container and Enhanced Tracking Protection to Firefox Monitor."

Baker added that while the internet is at an inflection point, he believes Mozilla is in position to still make a significant contribution.

"This is why we exist, and it's a key time to keep doing more," she said. "We offer heartfelt thanks to Chris for leading us to this spot, and for leading the rejuvenation of Mozilla Corporation so that we are fit for this purpose, and determined to address big issues."

In June, Beard said there were plans to launch a premium version of Firefox later this year. The browser would remain free, with Beard saying features would not be moved into the premium version, but users would pay a monthly subscription for services such as VPN.

In July, Mozilla ran a survey to see whether users would pay $5 a month to not see ads on certain news sites.