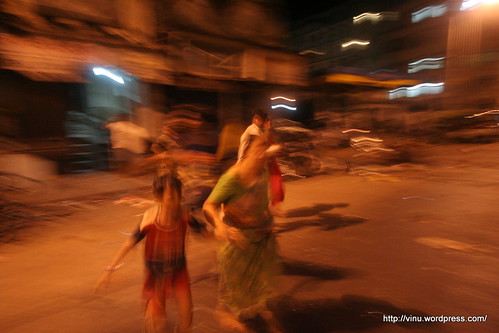 There is a huge difference between verified information, speculation, incorrect information and disinformation.

The net is buzzing about the communication enabled by Twitter, Flickr, youtube, wikipedia and bloggers from Mumbai, with CNN stating “It was the day social media appeared to come of age and signaled itself as a news-gathering force to be reckoned with.”

There are echoes from afar of Terry Gilliam's brilliant film Brazil in some of this - a chaotic stream of information, some of it very granular, some of it conflicting.

I saw the first signs of the tragic events unfolding on twitter from @breakingnewson; I'm in the UK and live BBC TV news here picked up the story around 2 hours later.

At this point no one appears to know who the attackers are or what their objectives are beyond the obvious disruption of society, but there is a plethora of fragmented information about events available to those of us online.

The collaboration usage of modern technology during these events are enormous as previous large scale disasters have proved - earthquakes, fires etc.

What's different about the current events are that it is entirely possible the attackers are using and monitoring 'social media'. Natural disasters aren't enemies but in this case we are dealing with sophisticated planning of negative acts of violence.

The traditional reputation and perception of "News' is that it is a trusted source of verified and filtered information; sites such as the Drudge Report break stories hours before the 'mainstream media' because of the level of fact and accuracy checking that goes on in large media outlets.

Wikipedia is doing a good job of aggregating and updating information, Twitter is entirely dependent on your judgement of the people you are following for veracity.

I attended the event Amplified08 in London yesterday and was in a session entitled 'The Social Graph and our many electronic identities. What would be ideal?'

During this few appeared prepared to accept that revealing details of your personal identity online could be used as a force for your subversion or robbery.

This of course is true with other media also - CNN anchor Jonathan Mann called a trapped hotel hostage on his cell phone and started asking questions that if monitored by the aggressors could result in identifying that person's location. He realized this was unwise and stopped.

Twitter has the power to give away this type of contextually valuable information, such is its power. Knowledge is power, for good or evil.