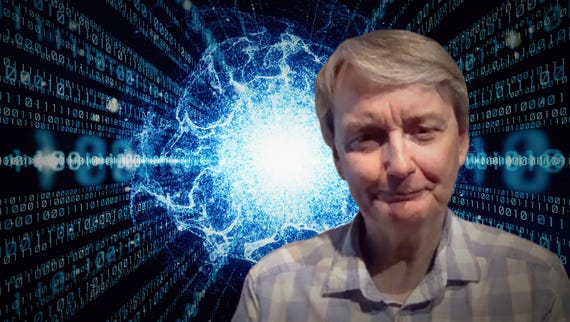 A local bus bouncing its way through downtown Lisbon and onto its elegant waterfront might seem an unlikely vehicle to deliver the weird future of quantum computing.

The bus itself is unremarkable, its journey from the outskirts of Portugal's capital into the city centre largely indistinguishable from most of the other buses on the busy roads. But this bus, and a few others like it, represents one of the first real-world usages of quantum computing.

For the pilot project in Lisbon last month, by Volkswagen and quantum-computing company D-Wave, 26 bus stops were connected to form four bus links. One of these ran from the WebSummit conference facility to the Marqués de Pombal traffic node in the city center -- the route taken by ZDNet on its journey into the city.

A team from Volkswagen developed a quantum algorithm for route optimisation between the stops. This algorithm calculated the fastest route for each individual bus in the fleet and optimised it on a near real-time basis. The car company said that, in contrast to conventional navigation services, the quantum algorithm aims to allow buses to dodge traffic bottlenecks along the route at an early stage.

Volkswagen is hoping for an additional positive effect: because the buses travel along individually optimised routes, which are calculated to ensure they don't cause congestion themselves, this should mean a smoother journey for other travellers.

Volkswagen's CIO Martin Hofmann said the car-maker wants to further expand its knowledge in the field of quantum computing and to develop an in-depth understanding of the way this technology can be put to meaningful use. "Traffic optimization is one of the potential applications," he said.

Volkswagen said it plans to continue the development: the idea is that bus operators could use systems like this to add temporary links to their scheduled services. That could be a handy way to tackle the extra demand caused by major events in the city area, for example.

Vern Brownell, CEO of D-Wave, said the Volkswagen pilot project is a significant marker in the use of quantum computing. "It's the first time a quantum computer has been used with a real-time workload. That could be historic," he told ZDNet.

Much of the focus on quantum computing recently has been on Google's claim to have achieved so-called 'quantum supremacy' by using such a device to solve a problem that would be impossible for a classical computer to calculate in any realistic time-frame. Brownell said Google's work was good science, but also noted that it was a niche problem "which I think important in the history of quantum computing -- but our focus is on practical applications."

"You have these problems where you have a lot of different variables and a lot of different interactions or constraints between those variables. From a computer science point of view, they scale exponentially, so the more buses you have, the problem becomes beyond the scope of what classical computers can do," he told ZDNet.

Quantum computers are good at coming up with a good answer for problems like this quickly, Brownell says. They won't necessarily come up with a perfect answer (thanks to the oddities of quantum computing), but they will arrive at a good-enough answer swiftly enough to use.

In contrast, a classical computer might come up with the correct answer, but it might be far too late to be useful -- in this case because the bus journey would have long since finished.

This requires a mind-shift for developers, although the rise of artificial intelligence has already helped with that, says Brownell. "All quantum computers are probabilistic by nature, and one thing that has happened recently that has got developers thinking about probabilities is AI.

"AI is the same thing: you don't compute the answer, you build a probabilistic model. So we're finding that people who are familiar with AI can understand quantum computing a little better, too."

There is also plenty of work for quantum computers to do. Brownell estimates that in the long term as much as half of existing computing workloads could be executed by quantum devices.

"These optimisation problems are everywhere," he said, referring to areas such as drug discovery, or creating new materials. "There are all these problems that are beyond the ability of classical computers."

Another reason for the rise of quantum computing is that Moore's Law is gradually running out of steam, so that a new model of computing will be needed, Brownell argues: "We think the world needs this kind of computational capability."

The fundamental building blocks of quantum computers are qubits -- small loops of metal that sit inside three meters of refrigeration to cool them down to almost absolute zero.

Whereas in a classical computer the binary digits are either zeros or ones, qubits can be in multiple states at the same time -- which is the core of how quantum gets a computational advantage.

"These qubits can actually be in two states at the same time, so imagine this cup can be here and not here at the same time -- it's kind of a mind-blowing concept, but that's what's going on inside these quantum computers and that allows you to compute with much more parallelism and ultimately with a lot more performance than you could with classical computers," Brownell says.

There are two models of quantum computing; the quantum annealing version used by D-Wave and the gate model used by its bigger rivals, including Google and IBM. D-Wave argues that its model is further along in terms of allowing customers to do practical things.

Brownell acknowledges that quantum computing is challenging because it's at the cutting edge of science and computer science. But it's perhaps no odder than the reality of the universe itself.

"It's strange, but ultimately the world works quantum-mechanically. It doesn't work classically. We are in a quantum-mechanical world, and really we are just tapping into nature -- and that will lead to all sort of improvements and efficiencies."