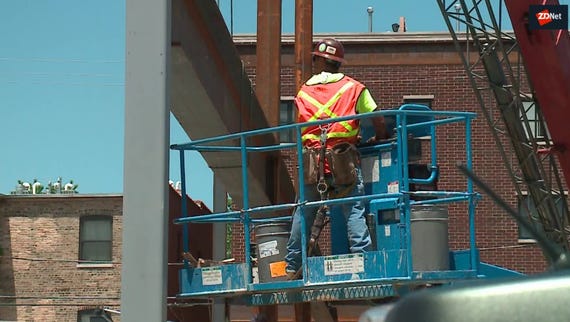 Komatsu and Nvidia to bring AI to construction
Watch Now

NVIDIA, as I've written about several times, is the company that started in gaming and graphics but which has rapidly transformed into an organization focused on AI. And not just a niche AI player, either. Nope, NVIDIA is swinging for the fences, leveraging its GPU technology, deep learning, its Volta architecture, its Cuda GPU programming platform and a dizzying array of partnerships to move beyond mere tech and become an industrial powerhouse.

CEO and Founder Jensen Huang gave the Sunday night keynote at CES, an prized time slot once dominated by Microsoft. And during the two hour event, Huang narrated a hit parade of breakthroughs and innovations the company has achieved in the last year. Ever the consummate salesman, Huang underscored how the new products were so power-efficient, small and high-performance with a mantra of "the more you buy, the more you save."

Gaming's no mere game
Of course, the gaming stuff's not exactly passé. Huang started by showing a new gaming laptop, based on NVIDIA's Max-Q technology, that's three times thinner and three times faster than last year's models. He palmed the thing and held it up to the camera so people could see how fluid it was, on its own display. Huang also discussed NVIDIA's partnership with Nintendo and how it made the Switch what NVIDIA says is the fastest selling gaming console in the US and Japan.

GPU greatness
With the audience excited and in the familiar video and gaming territory, Huang moved on to AI, discussing the Tesla V100, featuring 125 TeraFLOPS (trillion floating point operations per second) performance; and the NVIDIA GPU cloud that supports virtually every machine learning/deep learning framework. He pointed out that the Volta platform, on which the Tesla GPUs are based, is supported on every major public cloud and by every major server vendor.

On the systems front, Huang touted the company's DGX-1 supercomputer, a 3U server which combines eight Tesla V100 boards to provide one PetaFLOPS (1000 TFLOPS) performance. If you'd prefer to have something like that on your own desk, the company offers the "DGX Station" with four V100s inside. At just a smidge under $50K, DGX Station isn't exactly fodder for an impulse purchase. But, never fear, Huang also trotted out the $3000 TITAN V, a GPU add-in card for PCs. NVIDIA classifies the TITAN V as the "Supercomputer for Developers." The more you buy, the more you save, indeed.

Also read: NVIDIA morphs from graphics and gaming to AI and deep learning

Over drive
That's lots of cool tech, for PCs and for data centers. And even though CES took the computing reins from the old COMDEX conference, it is nonetheless a consumer show. NVIDIA knows this, of course, and Huang had lots of consumer-relevant stuff, specifically in the realm of autonomous vehicles (AVs -- a.k.a. self-driving cars). And while, yes, the underlying Volta and DGX products can facilitate all kinds of deep learning work to help in the development of AVs, NVIDIA has moved into AV-specific products and platforms.

At the keynote, NVIDIA announced a new system on a chip (SOC) for AVs, called the Drive Xavier and a "robotaxi" AI computer called the Drive Pegasus, that has two Xaviers on-board. And then there's the NVIDIA Drive functional safety architecture; a virtual reality safety testing platform for AVs called AutoSim; and another platform, NVIDIA Drive AR (augmented reality), for in-auto navigation.

Partners today, tomorrow the world
Perhaps the most interesting part of the AV focus is the partner story. NVIDIA has landed Baidu and ZF as Drive Xavier partners; it will build an AV compute platform with Aurora, and it will build self-driving rideshare vehicles with Uber. NVIDIA will also power the AI in Mercedes Benz's MBUX infotainment system and partner with Volkswagen (whose CEO, Dr. Herbert Diess, joined Huang on stage at the keynote) to imbue its future vehicles with AI.

Huang pointed out in his keynote that the transportation industry is $10T in size. That's an order of magnitude up from the entire $3T IT industry and three orders up from tech's $33B gaming subset. From the CES keynote, it sure seemed like NVIDIA is aiming to put its own growth and sales a couple orders of magnitude higher. And in moving away from being a PC industry component supplier to a company building super computers and whole platforms for VR, AR and AVs, NVIDIA just might get there. It's not just Intel that needs to watch its back here. It's IBM, Microsoft, Amazon, Tesla and even the traditional automobile manufacturers, too.

Join Discussion for: NVIDIA swings for the AI fences