ACCC chalks up a win in Federal Court after Optus told customers on competitor fixed lines in May 2018 they would be disconnected soon.
Written by Chris Duckett on Dec. 1, 2019 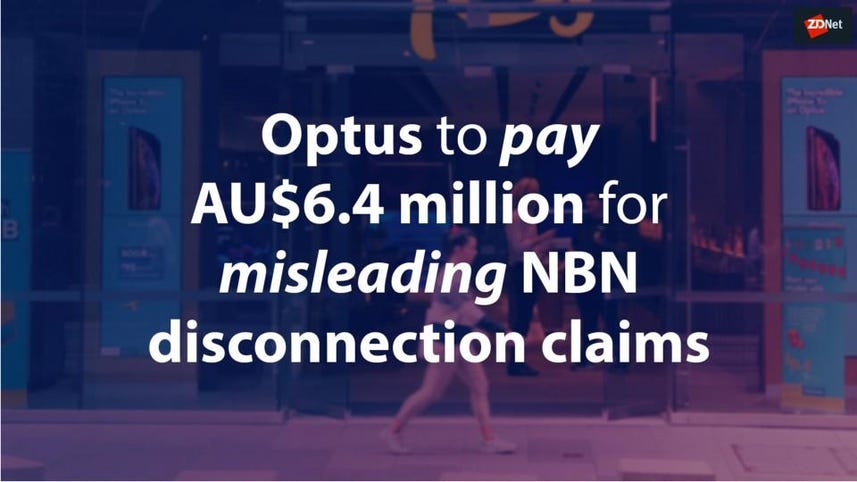 The Australian Competition and Consumer Commission (ACCC) has collected another victory, with Optus to pay a AU$6.4 million penalty for misleading its customers over NBN disconnections.

Filing its action in June, the ACCC said Optus emailed 138,988 of its mobile customers in May 2018 and stated that their home broadband connections, not run by Optus, would be "disconnected very soon".

At the time of filing, Optus acknowledged it misled customers about the need to migrate to the NBN and apologised to customers who received the email. It also offered a costless exit for those who took out the offer.

"We took this case against Optus because we were concerned its emails created a false sense of urgency for consumers and may have discouraged them from shopping around for the best deal available," ACCC chair Rod Sims said.

"We are concerned about Optus' recent track record in misleading consumers about the NBN. We expect that this AU$6.4 million penalty will serve as a warning to Optus and other telcos that they must not mislead consumers about their choices when the NBN is being rolled out."

In May last year, Optus was fined AU$1.5 million after it was found that the telco made misleading representations to its fixed broadband customers about their shift to the NBN hybrid fibre-coaxial (HFC) service.

At the start of 2019, Optus was also hit with a AU$10 million fine by the Federal Court after it admitted to misleading consumers and breaching the ASIC Act for its third-party billing practices. The telco admitted that it had knowledge from as early as April 2014 that customers were being billed for direct carrier billing services that they had unknowingly or mistakenly signed up for.

In October, Optus was booted from the Australian Communications and Media Authority (ACMA) complaints report after multiple amendments were made to its submissions and what was described as "ongoing data anomalies".

ACMA also used its powers to force Optus to get an external audit of the data it provides to the regulator.

An Optus spokesperson told ZDNet at the time that it did resubmit revised data to the ACMA, and is confident future submissions would meet all requirements.

In July, Optus revealed it had received an exemption to keep its legacy systems free from encryption when complying with Australia's data retention scheme.

"The legislative provisions which allow for certain exemptions to be granted were an important factor in Optus achieving compliance in an efficient and timely manner," Optus said in a submission to the Parliamentary Joint Committee on Intelligence and Security (PJCIS) review of the mandatory data retention regime.

"Because part of its overall data retention architecture involved storing some data in legacy systems, Optus applied for and received limited exemption from the encryption obligation."

The telco said there had been no reported "security incident or breaches" related to the retained data.