While Telstra will charge AU$15 a month eventually, Optus is doubling 5G data for a year.
Written by Chris Duckett on Nov. 24, 2019 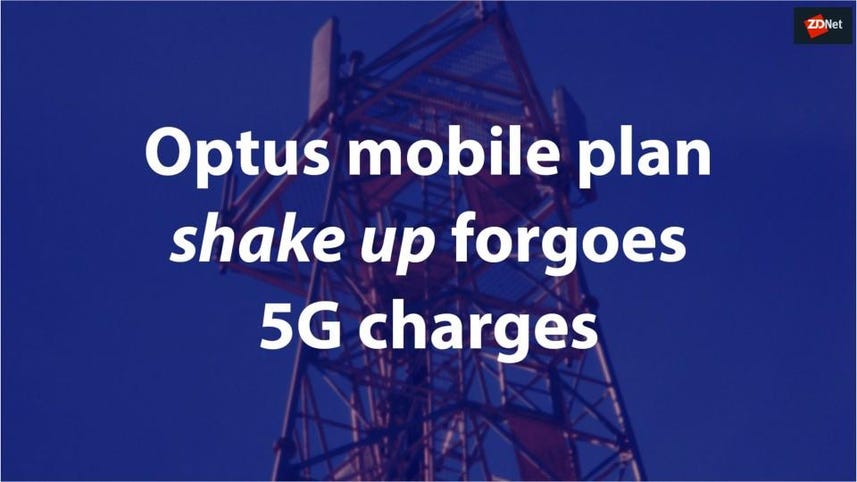 Optus is finally shaking up its mobile plan structure, simplifying from what was the most complex plans of Australia's top telcos.

Customers will now have the option of creating their own plans, or selecting from four pre-made plans from the telco. The smallest pre-made plan is 10GB for AU$40 a month, followed by 60GB for AU$50, 100GB for AU$60, and 120GB at AU$80 a month. The 100GB and 120GB plans have a monthly international data allocation in "zone 1" nations, which is most of the world besides South America and Africa.

For customised plans, a 150GB per month plan with all the inclusions tops out at AU$91 a month, and at the lowest end, customers can get 10GB for AU$40 a month.

Excess data across all plans is charged at AU$10 per gigabyte, and all plans include unlimited standard national calls and texts.

Like its competitors, the plans have moved to a monthly basis, meaning the end of lock-in contracts for the plan alone. Device repayment plans still exist, with Optus saying it now allows repayment of a device interest-free for 12, 24, or 36 months.

While Telstra said in May it would charge users AU$15 a month for 5G data after a year without charge, Optus said it would double data for the first year when users are repaying a 5G device.

Optus plans also have the ability to use a data pool across multiple users. The telco is also throwing in access to Optus Sport, and a one-year Apple Music subscription.

Much like its concierge service for NBN customers, Optus is also introducing Optus One, which gives customers "their own dedicated 24/7 Optus One expert, with a unique number to call or SMS anytime so they are personally taken care of", the telco said.

For AU$120 a month, Optus One includes 500GB of data, 10GB each month for roaming, and users will have network priority and exclusive Optus Sport content.

"A key group of customers have told us that they are looking for an exceptional experience with their mobile provider so understanding that need, we have created Optus One," Optus managing director of marketing and revenue Matt Williams said.

"A plan for a multitude of consumers in the Australian market that travel extensively, are time poor and want a one-to-one customer service experience."

Earlier in the month, Optus made its 5G fixed wireless service generally available to the 138,000 homes in its 5G footprint.

The Optus 5G Home service kicked off at the start of the year, with customers paying AU$70 per month for unlimited data at a 50Mbps minimum speed guarantee.

"The reality today in Australia, is that there are large numbers of homes that want faster broadband, despite the National Broadband Network," Optus CEO Allen Lew said at the time.

Optus opens privacy can of worms with programmable voice play

Bringing an assistant into the phone calls of customers to help with a restaurant booking is an idea fraught with privacy concerns.

Most numbers are heading in the right direction for the Singaporean-owned telco.

Startups
The 5 best cheap printers of 2022