Last month, I wrote about how the TruSense passive monitoring system allowed adult parents of seniors to live independently while ensuring that they went about their daily tasks. For many, those daily tasks include taking medication. Adherence to prescriptions has long been a hot topic in medical circles. And while its causes vary, in many cases it simply comes down to forgetting or distraction. There have been a number of tech solutions proposed over the years, including the simple and inexpensive TimerCaps (which does offer a Bluetooth variant), but few options have gotten far past a CES . 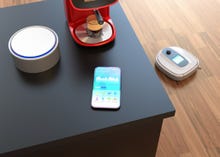 that has to reach the market after some delay is PillDrill. PillDrill resembles an oblong alarm clock (like a capsule, get it?) and displays the time, date, and other core info in its oblong window. (OK, like a capsule. We get it.) Flanking the screen to the right is the reader that provides the unit's core adherence monitoring. On the left is a set of buttons that control a very simple menu that displays past dosages. PillDrill ships with a couple of cleverly pill boxes that allow of medication for a week in removable daily pods.

Setting up is the typical confusing temporary hotspot affair that will likely require intervention for the non-tech-savvy. After entering medications (alas, no database is provided) and frequency, pills can placed into an NFC-equipped PillDrill pod or tags can be applied or tied to bottles or even tubes of creams. Users mark adherence by tapping the tag against the right surface of the device that triggers an on-screen acknowledgement.

If users fail to take medication the designated time window, the PillDrill optionally blinks a blue light around its or sets off repeated chirping. The intensity of both kinds of alerts can be adjusted. PillDrill can also send an to the user's smartphone via an app or notify family members that dosages have been taken or skipped. Unfortunately, though, it can't precisely remind for some medication-taking conditions such as taking a pill with a meal.

A bonus is a cube that the company includes that has various sentiments on it -- "Good," "OK," "Awful," etc. By placing the appropriate side of onto the PillDrill tag scanner, one can record their mood or pain . PillDrill should consider expand the system of cubes so that it could be applied to more symptoms or to log meals per the above condition limitation.

PillDrill is far from foolproof. Since it relies on the of consumers to manually the pill pods and tabs, it's easy to cheat by scanning them without actually taking the medication. PillDrill isn't even aware if a medication bottle has been opened. And even if one is trying to stay honest, it's possible to scan a pod, empty the pills onto a counter and still forget to take them. On the other hand, PillDrill can accommodate compliance even when its host unit isn't there via its app.

PillDrill also can't formally support multiple medicine takers in a , although workarounds could probably be by configuring the pods. Finally, while it may be a fad of the , integrating a voice agent like Alexa would be helpful for adding ad hoc reminders or querying PillDrill when was the last time the user took the medication.

Overall, though, PillDrill is effective, and, after setup, it's very simple to use. It costs $199 and is available at a promotional launch price of $149.

You can eat these sustainable soft robots

One day, these ingestible could be used for medical purposes.

An array of sensors used to detect paired with a way to call for help through an Echo device provide a less obtrusive alternative to bulky alert wearables.