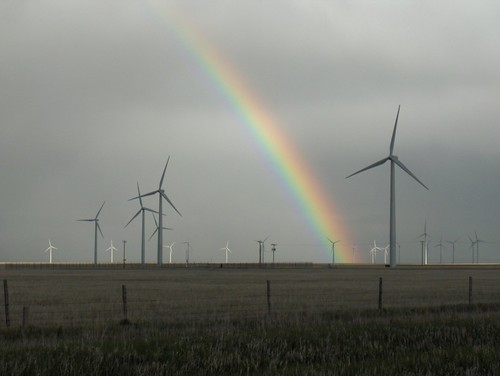 Why might a bat care what color a wind turbine is? Because the insects it hunts by echolocation do, according to a new study.

The research, published in the European Journal of Wildlife Research, finds that the typical white and light grey colors of turbines are more attractive to insects than purple tones. And whatever we do, we shouldn't paint turbines yellow, the insects' fave. Paints with high ultra-violet and infrared properties? Also a no-no, according to the research.

Depending on their location, wind turbines kill many bats that are migrating through, looking to roost, or feasting within wind farms. (Eastern states tend to have higher bat fatalities, with the hoary bat, the eastern red bat, and the silver‐haired bat species being most vulnerable). Interestingly, previous research has found that bat deaths don't typically result from striking blades but by the inability of the small mammals' lungs to cope with sudden air pressure changes as the blades whirr past.

The deaths typically happen at night and during the summer when insects flit about turbines the most. But a three-year study conducted in the English countryside suggests that painting turbines certain colors, with purple being the least tempting to bugs, might help decrease bat mortality.

The researchers placed colorful placards—pure white, light grey, squirrel grey, sky blue, traffic red, traffic yellow, pale brown, opal green, red lilac (aka purple) and jet black—beneath a turbine and kept track of what bugs landed on what color and how often they did so, day and night.

If the solution were as simple as painting turbine structures in a different colour this could provide a cost-effective mitigation strategy.

So purple turbines it is! Purple's my favorite! Though I suppose not everyone's. At least it would blend with sunsets?

But wait, before we douse all our turbines in lavender, the researchers say color might not be the only factor at play. Heat might also bring the bugs to the structures. For instance, they suspect that the heat-absorbing black color in the study served as a "thermal lure" to many insects.