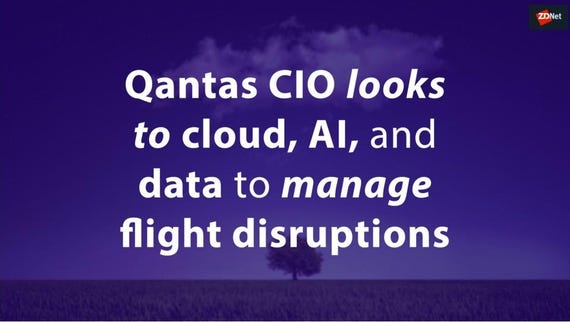 Qantas CIO Susan Doniz has revealed that 70% of the airline's applications are now in the cloud as the company looks to use artificial intelligence (AI) and data technologies to better manage flight disruptions and improve its overall digital operations.

"Across our cloud journey, I'm incredibly proud of where we are, especially for an airline, where almost 70% of our applications are on the cloud," she said, sitting on a panel at IBM's Cloud Information Exchange in Sydney this week.

Doniz, who joined Qantas nearly three years ago from SAP, explained being in the cloud is a necessity for the company, especially for Qantas where it's really starting to scale its use of AI.

"We need the cloud in order to drive a sustainable competitive advantage for Qantas … the reason for that is because increased scale allows you to scale up and down to meet demands," she said.

Diving into exactly how Qantas is using AI, Doniz said the technology has improved the turnaround time for its budget brand Jetstar's "low cost guarantee".

"It used to take a really long time to do because somebody actually had to go back and look at it. Now, what we do is we use the automation and the data technologies to do that in seconds. Most probably don't even notice that that's actually happening," she said.

See also: You're now free to move about the network: Airlines offer IT a glimpse into customer service (TechRepublic)

She said the same technology is helping the company with flight disruption management and is providing feedback that never previously existed.

"In the past, actually when an event occurs, it takes a long time to figure out how we are going to get the aircraft, how we're going to get people in the right place, and continue them on to the right places because these things have a ripple effect; it's not just that one event you're solving. You actually end up solving for a whole series of events … so what we've done is now we have the technology that allows us to do that in minutes. We used to take hours in the past," Doniz said.

"In some of the [chatbot] trials we've done, 90% of the answers were able to be answered by chatbots … which I think is really critical to our strategy. It's about freeing people up to provide a service that Qantas is best known for versus getting stuck in all the paperwork and backward functions that don't necessarily add value to the people that's doing the work," she said.

On the point of fuel usage, it was revealed earlier this year by Qantas CTO Rob James that the company partnered with the University of Sydney and the Australian Centre for Field Robotics to develop a new flight-planning algorithm to help the company optimise the way it flew to destinations and save on fuel costs. Last year, Qantas' fuel bill was AU$3.2 billion.

"What it's actually doing, it's simulating, it's taking millions and millions of data points and simulating tens of thousands, or hundreds of thousands, sometimes, of flight paths and taking real-time weather data, taking flight patterns, and wind patterns, and also putting in different elevations to pick the most optimised, safest and fuel-efficient route that we can fly," he said back in April.

Migliorini said the problem Qantas was facing at the time was its legacy systems could not handle the compute power required to run the analysis around determining future flight routes.

However, since moving most of its applications to the cloud, that problem has dissolved and the turnaround time for results has significantly improved, with James noting that Qantas is now able to simulate everything from new flight paths to different engine configurations, as well as different weather patterns and traffic conditions.

"What's really interesting about that is every time we run one of these simulations, we're basically doing a 10-year study in about nine hours. How do we do it? Again, we do it in the cloud," James said.

"We basically spin up approximately four thousand CPUs, run the analysis, and then spin it right down to nothing.

"It's the promise of cloud, something we would not have previously done in a traditional data centre."

Join Discussion for: Qantas CIO looks to cloud, AI, and data to...