With competitor Boeing on the ropes, Airbus and Microsoft try to reinvent the way planes are made.
Written by Greg Nichols, Contributor on June 17, 2019 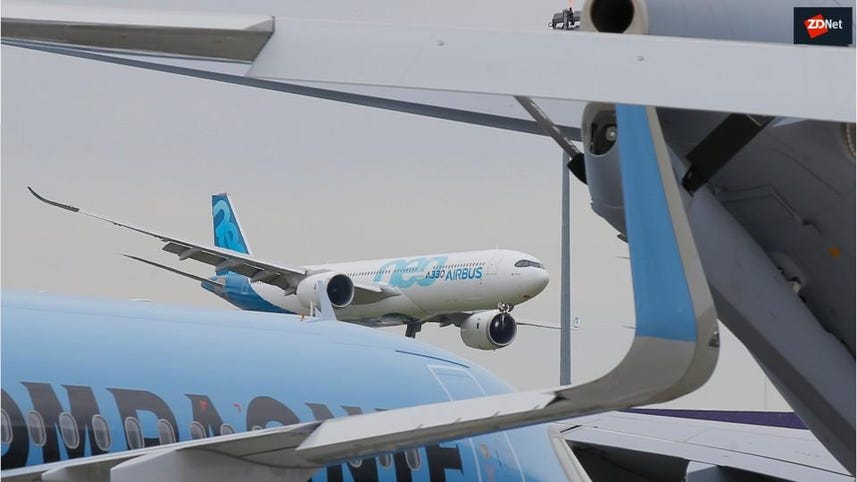 On the first day of the Paris Air Show, the aerospace industry's biggest event, giant Airbus has signaled its intention to become one of the biggest manufacturers in the world to implement mixed reality technology on a large scale. Airbus is teaming up with Microsoft's Microsoft's Cloud and AI group to implement its mixed reality strategy.

Business had been good for Airbus, and with Boeing on the ropes after the 737 Max fiasco, demand is rising. That's putting pressure on the company's production lines. Airbus, which makes helicopters and satellites in addition to commercial airplanes, plans to produce around 20,000 aircraft over the next twenty years, according to the company.

"Our challenge in the coming years is to manufacture more aircraft faster, and for that we need to enable our workers to be much better equipped and to be much more effective in what they do. We need to raise the bar," says Jean-Brice Dumont, executive vice president of engineering at Airbus. "To face this challenge, we intend to make an intense use of mixed reality and that's why we've partnered with Microsoft," Dumont says.

Microsoft's HoloLens technology presents digital information in three-dimensional overlays projected onto the real world by using holograms made of light and sound. A big upgrade for the HoloLens 2, which was recently released, is the ability for the user to manipulate holograms as if they were physical objects. Eye tracking, one of the under-touted features on many of the newest crop of augmented reality and virtual reality devices, enables the device to determine where a user's eye lands on the screen, a particularly organic user interface. Eye-tracking can also be used to measure engagement, which is relevant to employee training.

Airbus plans to broadly implement mixed reality both on the line and in training scenarios. For example, employees utilizing HoloLens 2 can learn critical procedures without tying up active manufacturing equipment or putting themselves in potentially dangerous situations. Another advantage is that training can be performed remotely.

Microsoft's mixed reality technology, which Airbus has been using in a limited capacity for some time, will also be deployed to help Airbus production workers access information and instructions while their hands are occupied. For example, instructions or diagrams can be overlaid on a real piece of machinery to aid in complex or hard-to-reach tasks. According to a release accompanying the joint announcement, these kinds of mixed-reality solutions have cut manufacturing time by as much as a third without any sacrifice in quality.

"Mixed reality can help us to increase quality, safety and security," Dumont says. "The level of human error is significantly reduced, and in aerospace, increased quality is increased safety—and needless to say, security goes with that."

Airbus and Microsoft are also developing mixed reality solutions for Airbus's customers. The first of these is a mixed reality training program first released with Japan Airlines (JAL) to help maintenance operators and cabin crews access instructions while on the job.