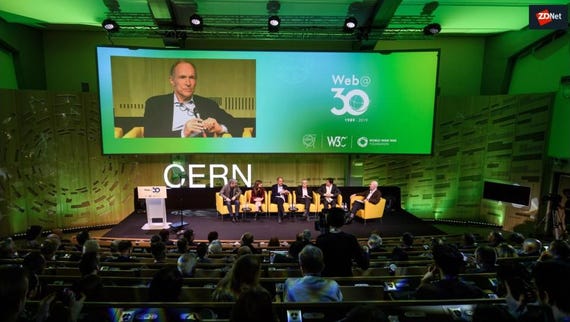 Tim Berners-Lee: In 30 years, the web will go beyond our imagination
Watch Now

Microsoft has begun to show the first fruits of its efforts to rebuild its Edge browser on a Chromuim base (or at least what's left of it). The result is open for business. The company's tossing in the towel on its own web rendering engine can be seen as a blow to its pride; it is, after all, an endgame for its one-time ambition to dominate web development standards. But the decision also says a lot about how the web and Microsoft have evolved. Ultimately, Microsoft's move to support Chromium is less of a defeat than a default.

While the web has become a strategic app platform, the pendulum -- at least for accessing consumer services -- has swung to native mobile apps. Many of these have become the kind of lowest common denominator gateways that web applications are on the desktop. Google, for example, offers millions of apps in its Android app store, but the company tends not to tout Android's advantages for developers. Even though Google now produces its own Android phones, the company -- in contrast to Apple -- tends to downplay third-party app optimizations versus its latest AI wizardry.

There is also movement toward extending mobile apps back toward more desktop-like platforms through various means. Google's Pixel Slate, for example, dispenses with Android in favor of its browser-centric ChromeOS. That operating system can now run a high percentage of apps in the Google Play store. Samsung and Huawei provide an embedded desktop mode that springs to life when their phones are connected to the right peripherals, a feature coming to Android broadly. And Apple, while vowing to keep macOS and iOS separate, is gearing up to allow both it and third parties bring many iOS apps to macOS via its Marzipan initiative. Microsoft, of course, also has a play in cross-platform development with its Xamarin tools.

In a world where Microsoft cares less about the role of Windows and has begun taking bolder steps to integrate mobile phones that drove its own from the market, the browser may not be the universal de facto platform that it once promised to be. Nonetheless, switching to Chromium will also enable Microsoft to create versions of Edge for older versions of Windows and the Mac. While these are small or shrinking platforms compared to iOS and Android, supporting them is more consistent with the focus of today's Microsoft, which fights more of its battles in the cloud. They are also important clients in the enterprise, where Microsoft is committed to serving the customers who drive its revenue.

Besides, as Chrome on iOS has shown, a browser can maintain significant market presence even when it must do without its native rendering engine. Like Google, Microsoft is interested in seeing Edge go cross-platform in order to strengthen ties to its own browser regardless of nuances in page display. Its signature effort to date in extending workflow beyond Windows is the perfunctorily named "Continue on PC" feature that lets you pick up from an Office document or web page on your phone or PC on the other platform. Continuing with the utilitarian naming is "Your Phone Companion," an app for iOS or Android that lets you access text messages and photos from a mobile phone to a Windows PC. PC vendors such as HP and Dell have also developed options to facilitate sharing between Windows and modern smartphones.

Also: Google Chrome to get a Reader Mode

Some concerned about competition or vulnerability from a web rendering monopoly have expressed concern about Microsoft casting its lot with the Google code base along with Opera, another survivor of the early browser wars. However, Microsoft's timing to improve the compatibility of its mobile browser could hardly come at a better time. With Google's recent decision to comply with European antitrust mandates and expose Android buyers to browser alternatives, Edge is primed to be one of those choices. And beyond Google's domain, Apple now has a large enough installed base of Safari to shift the burden of compatibility on to the website creator.

Microsoft releases its Google Chrome-like Edge browser for testing
For now, it looks a lot like Chrome, but Microsoft promises differences will come.

How is Microsoft's Chromium-based Edge really different from Chrome?
Microsoft is removing or replacing more than 50 Chromium services in building its new Chromium-based Edge browser, besides working to provide some unique value-add not found in every other Chromium browser.