The successful supplier will be responsible for delivering compute hardware and associated software to the Reserve Bank of Australia for the next five years.
Written by Aimee Chanthadavong on Jan. 14, 2020 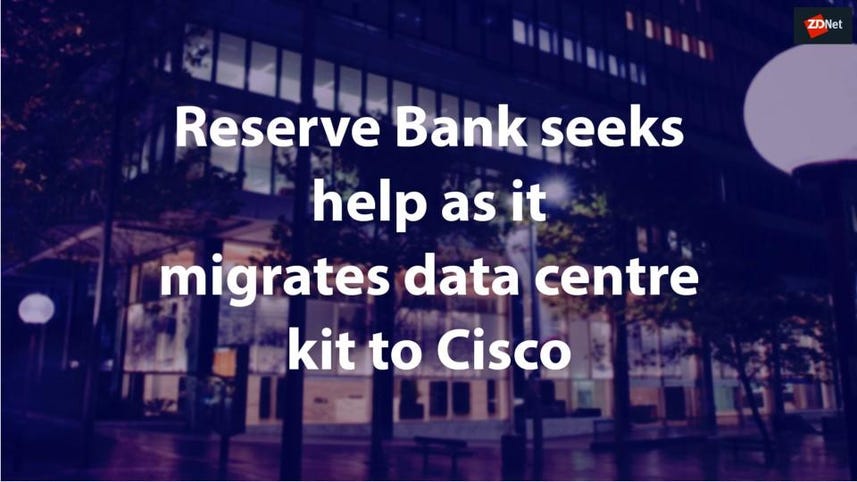 The Reserve Bank of Australia (RBA) has launched a request for tender as it searches for a provider to deliver its Cisco data centre compute equipment and services for the next five years.

According to the RBA, it's part of larger upgrade plans to migrate most of its existing physical services and associated networking to Cisco, which the bank uses to operate and support internally managed IT infrastructure, including network, compute, and security across multiple data centres and domains.

Under the contract, the provider would be responsible for supplying Cisco hardware for the data centre network by July 2020.

In addition, the tender document said supplying associated software products, ongoing support, and the provision of professional services in relation to the design and build of the project would be key responsibilities of the successful tenderer.

The central bank added the successful tenderer would also need to be a Cisco certified gold partner in Australia.

The tender, according to RBA, builds on the bank's existing strategic partnership and volume pricing agreements that it already has in place with Cisco.

The RBA previously conducted a review of its server computing solutions to determine whether its physical kit would still be relevant over the next decade.

The review identified four primary forms of server computing that would be required to meet the various needs of the business over the 10-year period: Stand-alone servers, converged servers, hyperconverged infrastructure, and cloud.

Following the review, the RBA turned to the market, publishing an expression of interest (EOI) for the "provision of server computing solutions".

The deadline for the tender is February 11.

RBA governor has said one of the consequences of the slower-than-promised rollout of the NPP by some of the major banks is that there has been less effort than expected on developing innovative functionality.

Commonwealth Bank focused on innovating amid pressure from fintechs

CEO Matt Comyn said there's not much innovation for fintechs to bring to the market that his bank hasn't already brought to the fore.

ASIC and RBA among those to have invited fintech and regtech startups through its doors for assistance in understanding regulatory requirements and identifying the viability of their products in the market.

RBA not convinced Facebook's Libra will succeed in Australia

The Reserve Bank says it is unclear whether there will be strong demand for global stablecoins, particularly for domestic payments.

How AI is making Gen Z the most financially sophisticated generation