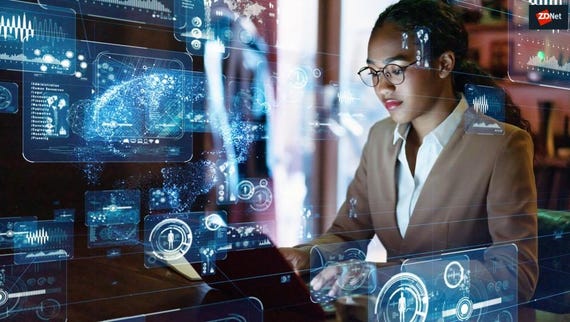 AI at the workplace: We prefer robots to managers says survey
Watch Now

Exoskeletons have been a staple of the sci-fi imagination for decades: think Tony Stark's Iron Man outfit or Aliens' Ripley suiting up to shift containers (and battle the xenomorph queen). But those visions are becoming today's industrial reality, as robotic exoskeletons start to make their way into factories and building sites.

While medical uses aim to assist with rehabilitation or help people to move who would otherwise struggle, in the commercial world robotic exoskeletons allow human workers to carry heavier loads than they would otherwise, or work in uncomfortable positions -- such as with their hands overhead -- for longer periods before feeling strain and fatigue.

There are two main types of exoskeletons: passive, which don't have motors or actuators, and powered, which do. Passive exoskeletons can help support the wearer's body and redistribute weight and physical stress, while powered exoskeletons are typically used to amp up a worker's physical strength, allowing them to move or carry heavier weights. Both are starting to spread in industries that require workers to do repetitive, hard physical labour.

Vehicle and aviation manufacturers are among the first big name adopters: BMW, Audi, Ford, and Boeing have already started rolling out exosuits. Ford announced last year that it was rolling out passive EksoVests from Ekso Bionics across 15 of its plants to "help lessen the physical toll that their job takes on [a worker's'] body" when they're asked to do overhead work, according to Ford. The suit supports the employee's arms as they work overhead, and gives them five to 15 pounds of lift assistance.

Ford is thought to be one of the bigger users of exoskeletons to date, but other car makers are deploying exoskeletons, although several have opted for build-your-own rather than off the shelf systems. Hyundai debuted its own exoskeleton vest, the VEX, earlier this year.

The back-worn exoskeleton "is targeted at production-line workers whose job is primarily overhead, such as those bolting the underside of vehicles, fitting brake tubes, and attaching exhausts", Hyundai said, and is expected to be rolled out at Hyundai plants. GM meanwhile has teamed up with NASA to create a robotic glove that can help increase the amount of force a wearer can exert when gripping an object or lifting up a piece of equipment for long periods, cutting the likelihood of strain or injury.

Closer to home, the construction industry is also shaping up to be another significant user of exoskeletons. Builder Wilmott Dixon, for example, started piloting the ExoVest at a Cardiff site last year.

One factor driving the rollout of exoskeletons in both the construction and auto industries is the possibility of cutting worker injuries as well as enabling skilled staff to work for longer.

"What's really taking off is the industrial and construction area, where there's an ageing workforce. A lot of younger people aren't moving into some of these manufacturing tasks, and so people need devices for assistance in that area," says Thomas Sugar, professor in the human machine integration lab at Arizona State University.

As a result companies using robotic exoskeletons are effectively saying to staff they can still do the same work that they always been doing but with less fatigue, he says. "Fatigue is all is always a driver towards injury."

While most industrial uses of exoskeletons to date have involved passive systems for isolated areas of the body, such as the back or hand, exoskeleton makers are now turning to making whole-body suits. Sarcos is one of the first to market with its whole-body design, the Guardian XO. The XO is also one of the few powered exoskeletons available on the market today, and is largely targeting military applications -- it recently won a contract to supply the XO to the United States Special Operations Command.

However, the military use of exoskeletons -- at least in the short term -- is likely to focus on logistics, and allowing military personnel to move heavy equipment around, rather than super-soliders (a plan to build a combat-ready exosuit known as Talos was shelved not so long ago).

"For the military systems, currently, [powered exoskeletons] are a little bit too big, they need too much electricity, and they're a little bit too noisy. But if you're in a manufacturing plant, you can recharge the batteries, if it's a little bit noisy, it's okay. And you know, and you can wear it for three hours and take it off, and then put it back on again for another three hours. For the military though, that was a hard problem, because you needed something that could last for a long time, be super-quiet, it has to pay for its weight penalty, all those types of things. It was just harder," Sugar says.

Smaller units rather than full-body systems may be the first to be rolled out more substantially by the military: the US army is trialling a Lockheed Martin powered exoskeleton, the Onyx, which is worn on the leg to reduce the load on the user's knees, as well as the Delphy Exoboot, which does a similar job for the ankles.

Rian Whitton, a senior analyst at ABI Research, predicts in the short term that passive suits will be the main bulk of exoskeleton deployments, and that the industry is another 12 to 18 months away from seeing suits rolled out at in their thousands and tens of thousands.

"Passive suits I think are going to be deployed in that range, if not now, then very soon. They're already being deployed in the thousands at Toyota plants in the United States. I think passive exoskeletons do have a future, but for powered exoskeletons, I think the technology challenges are much harder. And given the added expense [of powered suits], it is a much harder value proposition for big end users and there needs to be more validation before it really kicks off," Whitton says.

The question of validation could help fire the starter's gun on a more substantial phase of growth for exoskeletons; information is still being gathered on the long-term ROI for exoskeletons and companies may need to see more hard data on how suits will impact their bottom line, especially given the prohibitive price tags for more complex systems.

ABI's Whitton expects that new business models will develop, moving businesses' spending on exoskeletons from capex to opex. "What I think these companies are trying to do is shift the market towards service-based business models. They're building common IoT platforms, whereby people don't buy these suits up-front but rather they get leased, and then the data that is aggregated from all the sensors -- on body position, work, and movement -- can be transferred to viable data analytics solutions, which provides longer added value over time," he said.

By gathering and analysing data from exoskeletons, manufacturers would presumably hope to show that their systems can deliver return on investment by making workers more productive by reducing fatigue, and also cutting the levels of injuries among workers and the compensation that can accompany them. However, it may be by reducing wearers' range of movement, and asking employees to wear heaving 'one size fits all' exoskeletons, that exoskeletons end up displacing, rather than reducing, physical strain.

As well as developing new service models and producing more long-term studies into exoskeleton use, there are other challenges ahead. A lack of standards, both technical and practical, is also proving problematic. As is often the case with new technology, in a race to market, manufacturers are bringing out systems before the standard-setters can keep up. It's an issue that is being acknowledged by those in the industry, and standards are currently in development, but it's clear that the era of the exoskeleton has begun.