Full Bio
Posted in Between the Lines on December 3, 2019 | Topic: Tech Industry 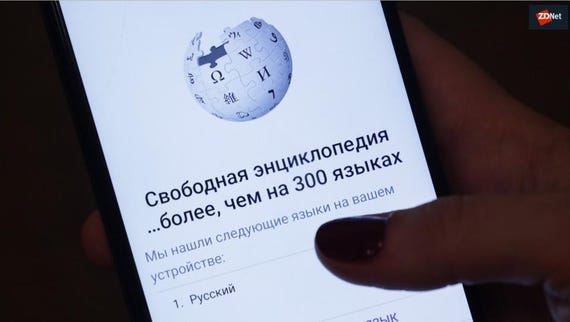 The Kremlin finds Wikipedia 'unrealiable', will create its own version
Watch Now

The Russian government plans to allocate 2 billion rubles (~$31 million) to bolster an online encyclopedia project managed by a Russian company, which will eventually replace the widely available Russian version of Wikipedia.

Rumors about the Kremlin's plans started circulating in September and were confirmed in early November at a meeting of the Russian Language Council, also attended by President Putin.

"Regarding Wikipedia [...] It's better to replace it with the Great Russian Encyclopaedia in electronic form," said President Putin at the time, as quoted by Russian news agency RIA.

Putin was referring to the portal bigenc.ru.

The 36 volumes were ported to electronic form and hosted on the bigenc.ru portal, where they've been made available to students, professors, and all Russians alike.

Two weeks after Putin's statement, Sergey Kravets, a spokesperson for the Great Russian Encyclopedia told Euronews Russia that they were set to receive 2 billion rubles (~$31 million) from the Russian government to bolster the bigenc.ru portal with new information.

Russian news agency TASS said Kravets and his publishing house will also translate the Great Russian Encyclopedia into other languages, and that countries, such as Brazil, India, China, and South Africa, were also interested in the project.

Russian authorities have long claimed that information included in the Russian version of Wikipedia is inaccurate and not verified.

In August this year, the country's minister for digital development, telecommunications, and mass media advised students and journalists not to cite data sourced from Wikipedia.

Some prominent Russian bloggers have also made wild accusations, claiming that the Russian version of Wikipedia is "practically owned by Western intelligence agencies."

Russian authorities didn't say if they plan to ban the Russian version of Wikipedia once the BigEnc.ru project completes in 2022.

Russian authorities previously briefly banned Wikipedia in 2013 and 2015 over an entry about a cannabis strain.

If the government ever wanted to ban the site, it would be easier than ever. Last month, a new "internet sovereignty" law entered into effect in Russia, a law that grants the government more powers over the country's internet infrastructure. The law includes provisions that would force all ISPs to redirect traffic through servers and equipment managed by Russian authorities, effectively creating a way for the government to discretely block sites without having to publicize bans or force decisions upon ISPs, a system very similar to China's Great Firewall technology.

Join Discussion for: Russia to invest $31 million in a local Wikipedia...