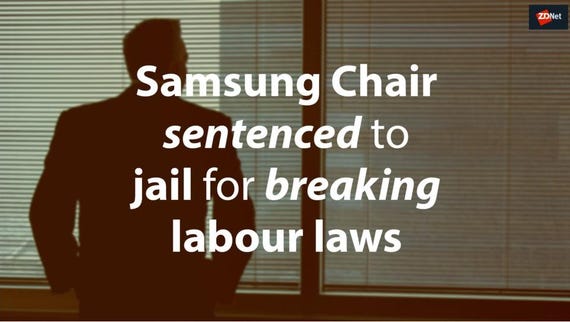 Samsung Electronics' chairman of the board Lee Sang-hoon has been sentenced to 18 months in jail for sabotaging labour union activities.

Lee is among 26 Samsung executives that were convicted by the Seoul Central District Court for violating labour union laws. Seven received jail terms while others received suspended sentences.

It is the first time ever in Samsung Electronics' 50-year history that the chair of the board has been jailed.

In a rare statement following sentencing, Samsung Electronics and Samsung C&T, the de facto holding company of the Samsung business group, apologised for causing disappointment and worries over its labour union problem and promised that it would "never happen again".

"We humbly accept that how the company perceived labor unions didn't meet citizen's eye-level and society's expectations," Samsung said. "We will establish a forward-looking and healthy labor union culture that is based on the spirit of respect for our employees."

Chair Lee Sang-hoon, who is highly respected among his peers and was previously the CFO of Samsung Electronics, is considered a close aide to Samsung Group's de facto leader JY Lee, who is on trial for bribery charges.

Since the group's founding in 1938, the South Korea business group practiced a famous -- or notorious -- no union rule. Samsung Electronics, the group's crown jewel, was formed in 1969 and has never had a union.

Samsung has argued in the past that it properly compensates its employees with the industry's best salaries and benefits from not having a union, while detractors have claimed it violates labourers' rights.

The string of trials have also delayed Samsung's annual year-end reshuffle, which traditionally happen in the first week of December, but has since been delayed indefinitely.

The chair's conviction for labour sabotage, however, hardly spells the end of the saga as the sentencing came from the District Court. Samsung will likely appeal the sentencing and later face the case at an appellate court.

It's the first time the two companies have partnered.

Samsung is aiming to sell half a million of the foldable phones by the end of the year.

5G and foldable phones: The promises and problems (TechRepublic)

TechRepublic's Karen Roby and CNET's Jessica Dolcourt discuss the current and future state of the smartphone industry and the much-anticipated benefits of 5G.

Join Discussion for: Samsung Chair sentenced to jail for breaking...