Samsung Electronics doubled the initial stock for the Galaxy S8 smartphone compared to the S7 to prevent a bottleneck in early sales and as a show of confidence, mobile boss DJ Koh has said.

Two years ago, the Galaxy S6 edge faced supply problems due to a slowdown in securing the edge displays.

"We faced initial supply problems before so we decided to have plenty of [Galaxy S8] in inventories at hand to sell this time," the mobile boss said at a press conference at the sidelines of the unveiling event in New York.

"We are preparing more than double the initial stock compared to the Galaxy S7 and there will be no [supply problem] from when sales begin in April to the end of the first half," the president said.

Koh said the Galaxy S8 was the result of two and a half years of preparations in term of hardware -- more specifically the edge display -- and six years in terms of software, represented in new services such as Bixby.

"We faced trial and error to make the top and bottom bezel-less in design after having the left and right edge. We ramped up the yield rate [of the display] and have resolved all production process problems," he said.

Samsung will decide when they will deploy the Bixby intelligent assistant service around the April 21 sales date for the Galaxy S8, he said. At first, it will support Korean and US English, but will add Spanish, Chinese, German and British English by the end of the year, he added.

The open platform of Viv Labs, which the company acquired last year for the creation of Bixby, was the new intelligent assistant service's biggest advantage, Koh said, and the company is preparing for third-party involvement between June and August.

Mobile business CTO Injong Rhee earlier told ZDNet that Viv's technology will be commercially deployed in the second half of 2017.

The name Bixby was decided by a contest of around a thousand native English speakers, he added. 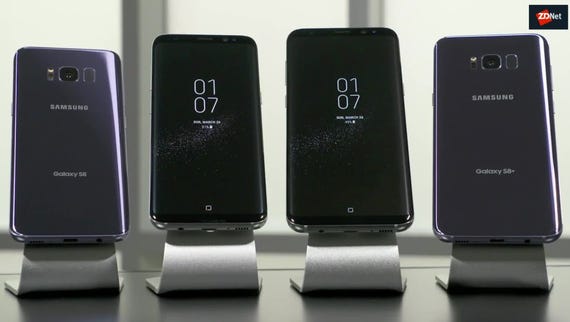 Join Discussion for: ​Samsung Galaxy S8 initial stock will be...