Full Bio
Posted in Between the Lines on August 22, 2017 | Topic: Innovation 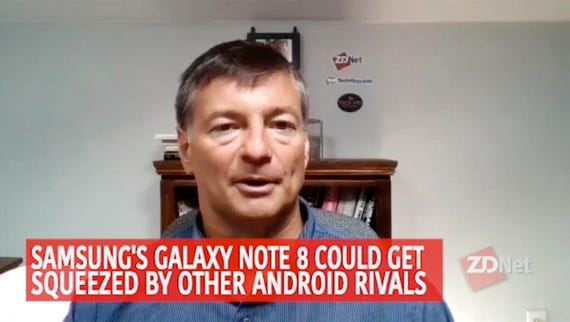 Samsung's Galaxy Note 8 will face a competitive minefield that varies significantly from its predecessor Notes as the device is going to be squeezed on multiple fronts.

The electronics giant launches the Note 8 ahead of Apple's 10th anniversary iPhone. The Samsung vs. Apple battle is nothing new so let's just say the iPhone will be a big competitor in the premium space. Enough said.

But the more interesting competition for Samsung derives from dynamics that didn't exist for the last Note launch a year ago (the recalled Note 7) or the year before (Note 5).

Here's a look of how the competition shapes up for the Note 8:

Samsung's Galaxy Note 8 vs. the Galaxy S8 and S8 Plus. If you bought the upsized Galaxy S8 then the differentiation between the Note 8 may not be worth the premium price. As CNET noted, the Galaxy Note 8 needs more than a stylus. Even a dual-camera may not be enough. And the slightly larger screen in the Note 8 isn't much of a selling point anymore. In addition, Samsung is going to up the promotion for the S8 lineup as Apple launches the next batch of iPhones. Those discounts are likely to make the Note 8 even more premium.

Also: Samsung's Galaxy Note 8: The big questions ahead of launch

Nokia 8. Yes, Nokia now has a flagship phone via its partnership with HMD. The device, which also features a pure Android experience, adds some interesting video sharing perks and split screens as well as a dual camera with Carl Zeiss optics. That camera setup negates one of the Note 8's key features. Pricing is to be determined, but it may be a contender on some level.

Google's Pixel 2. The rumors about the Pixel 2 are just starting to surface, but Google will have its own pure Android entry, a large screen version and features that'll put the device against the Note 8. We can toss in the Essential phone into this mix too. Google will likely maintain its premium pricing. Essential won't.

Should this Android scrum play out the way I think it will tech buyers will have an interesting choice. Do you buy one premium Android device and hold it for two years? Or buy one nearly premium device with a value price and replace it annually. Say the Note 8 is $900 or so. You can get good Android phones for half that.

Add it up and the Note 8 is facing new dynamics. The bottom of the market is getting increasingly competitive with premium devices. And the top of the market is a platform loyalty play between Samsung (Android) and Apple (iOS). At this point, I'd say Apple is the least of Samsung's worries when it comes to Note 8 competition.

Join Discussion for: Samsung's Galaxy Note 8 could get squeezed...