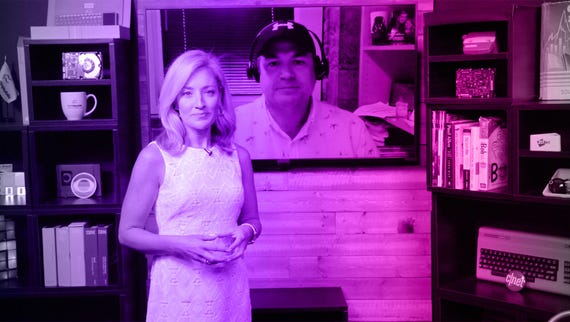 Samsung on Wednesday unveiled the Galaxy Note 10 and Galaxy Note 10 Plus. It's the first time Samsung has released two different Note models, and there's more than just screen size differentiating the two.

The new approach should help Samsung expand the Note line to enterprise and consumers alike, through a smaller form factor and lower price.

Some key facts you should know:

Preorders for the Galaxy Note 10 and Galaxy Note 10 Plus begin on Thursday, Aug, 8, at 12am ET/9 pm PT. Orders will arrive Aug. 23, the same day as retail availability.

At some point, consumers will refuse to pay four-figures for a smartphone. Until then, manufacturers will continue to push the price higher and higher.

The display on the Galaxy Note 10 features a single cutout, or hole punch, located in the middle of the screen near the top. That hole is for the front-facing camera, taking up as little space as possible.

Along with ditching the headphone jack, Samsung has also done away with a dedicated Bixby button on the Galaxy Note 10. Instead, the sleep/wake button will double as a way to activate Bixby -- similar to how iPhone XS users activate Siri -- with a long-press.

The fingerprint sensor is no under the display, just like the Galaxy S10 line. Iris scanning has been removed from the Note line.

The S Pen is still present and gaining new features. Samsung's Notes app is getting a major update, with new capabilities that should make note-taking on the Note more appealing and easier to deal with after the fact. Air Gestures also gained the ability to switch between camera modes and better presentation controls thanks to a new 6-axis sensor that includes gyroscope and acceleration sensors.

DeX is likely to make the biggest splash with enterprise users. Samsung and Microsoft teamed up, and now include Office apps on the Galaxy Note 10. Those apps are integrated with DeX, allowing users to share files between a PC or Mac while using DeX on their Galaxy Note 10.

Instead of requiring a dedicated monitor, Galaxy Note 10 users will now be able to use DeX on a Mac or PC, using both Galaxy Note 10 apps and computer apps alongside each other.

AR Doodle uses the Galaxy Note 10's camera to capture a physical environment and allow you to draw AR objects that will stay in place when watching the video. AR Doodle looks fun, but likely will be more useful for enterprise users who need to annotate a physical object while doing site surveys, for example.

Samsung Galaxy Note 10: How and where to buy

After the Note 10 becomes fully available on Aug. 23, the Galaxy Note 10 will also be listed at other popular retailers, including Amazon, Best Buy, Costco, Sam's Club, Target, and Walmart.

Last but not least, Sprint is offering the Galaxy Note 10 and Galaxy Note 10 Plus as well -- and you can get them on a lease at half price. That price is only available during the pre-order phase, however.