As SAP pushes ahead with its efforts to promote its next-generation digital innovation platform Leonardo, the first facility dedicated to the technology was launched in Brazil yesterday (3).

Based within the company's existing innovation lab in the city of São Leopoldo in southern Brazil, this is the first center to be focused on Leonardo in South America.

The choice to locate the first regional center was due to the fact that the Brazilian lab is already an established facility, staffed by about 1,000 specialists in areas ranging from design thinking and prototyping to Internet of Things (IoT) and blockchain.

The SAP platform and digital transformation I had the opportunity to attend SAP TechEd in Barcelona recently in order to assess the software giant's latest enhancements to their platform. In the process, I also gauged its readiness to fully support that urgent IT priority of our time, digital transformation.

There will be 30 professionals working on Leonardo initiatives alone. The idea is that the company will be showcasing the possibilities of the technology at the center, which will also act as an open space of experimentation for partners, clients and prospects who are, or intend to work on digital transformation projects.

SAP's innovation lab in Brazil has also received a noteworthy investment of R$40 million ($12.8 million) geared at improving the center's offering around IoT in agribusiness within the next five years.

"We have capital coming from abroad which allows us to drive a strong investment strategy in Brazil. We create jobs at our main operation and what we do in São Leopoldo could have been done in any other South American country, but the lab is based in Brazil and will continue to grow," SAP Brazil's president Cristina Palmaka told ZDNet earlier this year.

São Leopoldo in Brazil is the third city where SAP is launching a Leonardo-specific cluster. Prior to that, it launched such facilities in Paris and New York, with an upcoming launch planned for the city of Bangalore, in India. 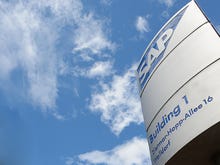 SAP's cloud push: Here's what customers are planning to do Signs are that SAP's cloud initiatives may be paying off even among the very largest businesses, the traditional home of on-premise software.
Cloud | Innovation
Show Comments
LOG IN TO COMMENT
| Community Guidelines