Details are scant, but Auris could change how lung cancer is treated
Written by Greg Nichols, Contributing Writer on Aug. 7, 2017 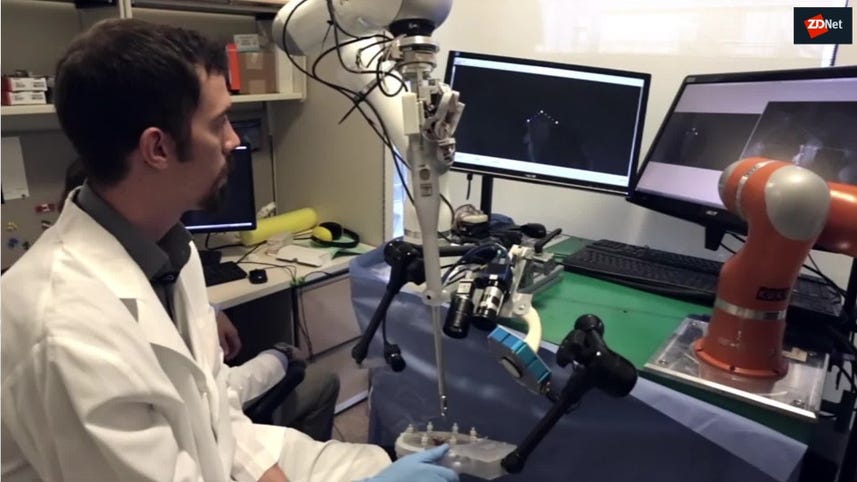 Auris Surgical Robotics just raised $280 million in a Series D round, bringing its total funding to date to $530 million.

Never heard of Auris? You're not alone. The startup--which was founded in 2007 by Federic Moll, co-founder of Intuitive Surgical, which makes the da Vinci robot--has made an art of keeping its R&D, and even its basic ambitions, under wraps. It has yet to release a product to market.

Last year, Auris got FDA approval for its first medical robot, an endoscope to help treat lung conditions. That bot is part of a class of flexible robots that avoid cutting patients by using the body's natural openings--the mouth, in the case of the FDA-cleared bot.

The company has chosen lung cancer as its first surgical target, according to a vague statement on its website.

So why did 39 investors help pad Auris' latest round? A big part of the reason is the incredible success of Intuitive, which saw $2.7 billion in revenue last year.

Intuitive received FDA clearance for the da Vinci in 2000, though at that time it wasn't clear how readily surgeons would adopt the new technology or how patients would react to it. But the robot quickly demonstrated reduced complications associated with, among other things, prostate removal.

Because of the position of the prostate, surgeons have to enter through the abdomen and then tunnel down to reach it. The invasiveness of the procedure carries high risks, and two common complications are incontinence and impotence. The da Vinci uses long pencil-like rods in place of a surgeon's hands, meaning surgeries performed with it are less invasive, reducing complications and recovery times.

According to Auris' website: "With our technology, physicians will be able to access early stage lung cancer without incisions, allowing accurate diagnosis and targeted treatment."

Cancers of the lungs and airways kill more than 150,000 people each year, in part because diagnosis often comes late. Current surgical treatments are invasive and risky. Auris clearly sees an opportunity to do better.

The company is based in San Carlos, California. I'll be following this one closely in the months ahead as Auris moves to market with its FDA-cleared device.