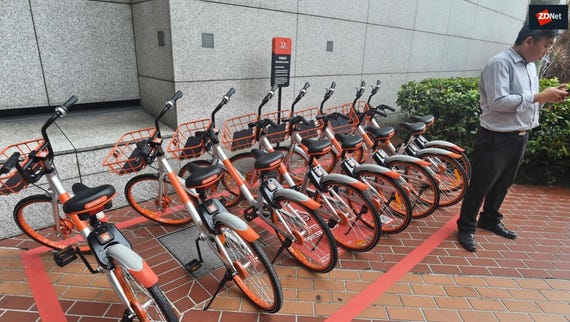 Sloppy with shared bikes? Not in Singapore
Watch Now

SG Bike and M1 are partnering to assess the use of Narrowband Internet of Things (NB-IoT) to more accurately identify the location of bikes and curb errant parking.

The Singapore bike-sharing operator and telco inked an agreement Monday to improve SG Bike's current geo-fencing system, which was deployed last August. In a joint statement, they said local authorities had put in more measures to urge bike-sharing users to park within designated places.

Last October, Singapore's Land Transport Authority, National Parks Board, and 16 town councils signed an agreement with five bike-sharing operators in the country to "reduce disamentities" and improve public safety, amidst growing incidents of indiscriminately-parked bicycles. The agreement set out guidelines for the operators to reduce such practices with the deployment of geo-fencing technology by end-2017.

Additional designated parking areas for shared bicycles--totalling more than 4,000 by end-2017--also were rolled out in various areas across the island, including MRT stations, bus-stops, residential estates, and parks.

SG Bike customers who do not park within designated spaces will have 15 minutes to re-park their bicycles or face a fine of S$1. Repeat offenders may face higher penalties, according to the operator.

It said the collaboration with M1 would explore the use of NB-IoT in monitoring, with real-time communication, and retrieving bicycles that were not parked within designed parking areas.

M1 launched its nationwide NB-IoT network last August, a year after the telco first unveiled plans to build the network in partnership with Nokia. One of its customers, Keppel Electric, had piloted an energy management meter on the network.