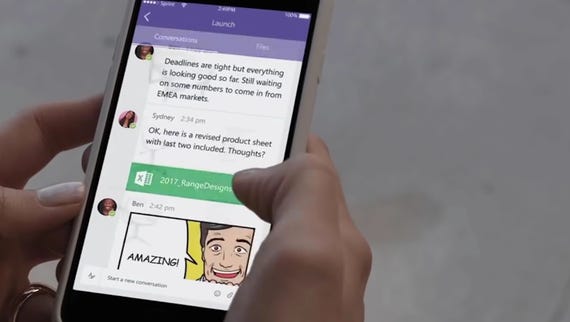 Everyone loves a David versus Goliath story, which is why most of the coverage of this week's launch of Microsoft Teams compared Microsoft's new online team-based collaboration service to Slack.

Slack loves to bill itself as the little communication engine that could, and they revel in the underdog/disruptor role. Slack HQ even got into the act, taking out a full-page ad in the New York Times "welcoming" Microsoft to the space and offering some frankly condescending advice.

But here's the thing: Although Slack and Microsoft Teams are superficially similar in terms of the features they offer, they address dramatically different markets.

Enterprise Apps: The Next Generation Enterprise applications power the heart of business productivity, but they are traditionally difficult to implement, upgrade, and innovate. We look at how the next generation of enterprise apps could change the game.

To put it bluntly: Slack is a product. Microsoft Teams is a feature. And that distinction makes all the difference in the world.

Slack does exactly one thing -- Farhad Manjoo in the New York Times called it "the office messaging app that may finally sink email" -- and does it very well.

Anyone can sign up for Slack's free tier, and the scrappy disruptor makes it extremely easy to do so. Like many other companies that deliver cloud services aimed at small teams, the resulting freemium model means that a small percentage of the product's users are keeping the lights on.

The numbers bear that out. In a recent blog post, Slack HQ bragged that it had 4 million active daily users. Of that number, Slack says 1 million are paying customers, ponying up between $80 and $150 per user per year.

That price tag doesn't include email or online file storage or office productivity apps. Add a Google Apps subscription (a popular combo in circles where Slack has been successful) and the price tag goes up another $60-120 a year, for a total of $140-270 per user.

By contrast, an Office 365 Business or Enterprise subscription costs as little as $60 a year for the Business Premium tier, which includes Exchange email, a terabyte of OneDrive for Business storage, Skype for Business, and ... Microsoft Teams. You can add the full suite of desktop Office apps with the E3 plan and still come in at $240 per user per year.

On paper, at least, that's a bargain, right?

Perhaps. Except that existing Slack customers aren't likely to switch to Microsoft Teams, because the Office 365 solution doesn't have any way of allowing people outside an organization to participate in a team. That feature is on the roadmap, but without it this is a product for internal teams only.

Of course, you can overcome that objection if you're willing to pay for an Office 365 license for your external collaborators. But even then, those outside team members would have to have separate licenses and logins for Microsoft Teams. Microsoft has made it clear they don't plan to allow a free tier, making it likely that full guest access will require a license of some sort.

At some point, Microsoft will offer the option for external confederation with guests, but the Office 365 licensing model means that option will never be as easy or as friction-free as Slack's freemium model.

As an Office 365 feature, Microsoft Teams is designed to keep its 85 million commercial customers in the family. For those customers who already have full Office 365 deployments, it's easy enough to flip the switch to enable this feature.

But for small businesses, freelancers, and agile organizations, it's a nonstarter.

Join Discussion for: Slack versus Microsoft Teams: It's really...