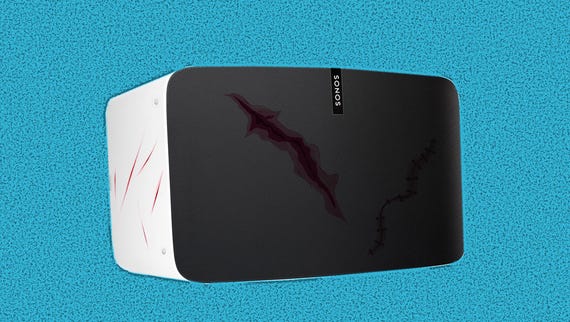 This week, Sonos announced -- and then subsequently retracted -- that it would end-of-life a series of popular audio streaming products made by the company during its first 10 years in business.

Sonos had decided to end support because these first-generation products lack sufficient processing power and storage to accommodate new features.

Although there have been many improvements in materials, miniaturization, and overall performance, loudspeaker technology has not fundamentally changed since its introduction in the 1920s. Provided that they aren't used outside their performance specifications, the drivers and cones can last decades. Other components inside speakers include magnets made out of ferrous and rare earth materials that do not expire.

In addition to solid-state MOSFET-based signal amplifiers, self-powered speakers also contain transformers, which are made of solid cores of metal wound with fine conductive wire. Updates to transformer technology in recent years include Gallium Nitride (GaN), which reduces heat and overall footprint. These components, particularly MOSFETs do not "go bad" unless they are abused, such as being subjected to high temperatures, very high voltages, or transient power spikes, which can be mitigated by a simple surge suppressor or power conditioner.

Until the introduction of smart streaming devices made by Sonos (and others, such as the Amazon Echo, the Google Home, and the Apple HomePod) high-fidelity speakers were investments that were expected to last many years and could be transferred from amplifier to amplifier should the technology change.

On the heels of this recent Sonos imbroglio, I believe it is time to reconsider whether we should continue to have these fully-integrated speaker devices, which include all of the logic and high-fidelity components in a single box. The electronic waste generated by this discarded equipment when they reach the end of their support lifetimes is not only environmentally irresponsible but also financially taxing on the consumer who has to replace these devices periodically.

I believe a solution to this problem exists, but it will require a fundamental change in how manufacturers like Sonos, Amazon, and Google approach building their equipment in the future.

The change starts with a new device and an open-source project, which I am tentatively calling "AudioPiLe."

Enter the AudioPiLe: The Hardware

Imagine an open specification for a tiny system board (credit card-sized, similar to a Raspberry Pi) that would have the following components:

Any manufacturer could make a small royalty-free device based on this specification. The device form factors and additional features --  such as integrated displays, lights, buttons, microphones, and types of output ports -- would vary. However, all devices from all manufacturers would need to be interoperable to retain said "AudioPiLe" specification and certification.  What would this PiLe device cost? I think it would be reasonable to expect that they could be sold for $25 to $100, depending on the specific features of the PiLe.

The Open Source PiLe of Software

In addition to a certification authority being formed for the express purpose of developing the AudioPiLe standard, I envision an open-source operating system, presumably based on the real-time derivative of the Linux kernel, developed by the community and the AudioPiLe originating organization. This operating system would be a software distribution that any consumer could easily install on any of these devices (accomplished through a simple file copy), or that the PiLe manufacturers could use as well.

The "official" distribution would always be available to the consumer should they decide to override the shipping firmware from the PiLe manufacturer. This would be a fallback in the event the manufacturer decided to end support for the device, becomes insolvent, or the customer prefers to use different software, for whatever reason.

The official AudioPiLe software distribution would not only have a kernel that supports the necessary device drivers, but it would also have a friendly web-based UI (and potentially an app). This would not be unlike what consumer Wi-Fi routers would have, such as those made by Linksys or NetGear.

But instead of strictly Wi-Fi and networking menus and settings, this software would have settings for attached subscriber streaming services and intelligent agents, such as Amazon Alexa and Google Assistant. It would have any other menus required to support whatever hardware and features that are enabled on that particular PiLe, and it would allow the user to view and diagnose underlying connectivity issues on their AudioPiLe network.

When these subscriber services are connected, they would also download the necessary components required to support those services, including the necessary audio codecs (such as for multi-room sound and to support proprietary sound formats) that may need to be licensed or require payment -- all which could be done via containerization and other modern modular installation methods.

The software should support all the encryption standards necessary to safeguard user data, as well as digital rights management. At the subscriber side, the cloud services providers would be able to provide respective UXes and apps to control device registration, and any "stores" for installable apps, features, and integration services.

Will they build it?

There is no reason why all this could not be implemented tomorrow, as all of the technologies exist at the device and in the cloud to support such a project. Amazon, Google, Microsoft -- and, yes, Sonos -- could agree to build it and the consortium and open source projects needed to support it. The question is: Do these companies consider themselves cloud service providers for audio and intelligent agents, or do they consider themselves primarily device manufacturers?

Ultimately, I believe that -- to companies like Amazon, Google, and Microsoft -- subscriber services matter, not proprietary control of the hardware. While Sonos appears to be more tied to hardware today, it could certainly make speakers with a modular PiLe card that could be replaceable over time if new features required it, or it could provide the Sonos Controller as an app to integrate streaming services for any network of PiLes made by any group of manufacturers.

The PiLe would put consumers on superior ground as far as being obsolescence resistant -- what would matter going forward would be the resiliency and functionality of the cloud services. With their relatively low price point, the PiLe could be updated with the new processor, storage, and network technology as needed and swapped out if the consumer wanted to make new hardware investments.

If a manufacturer abandons a particular generation of PiLe, and the consumer doesn't want to replace it, the community can always step in. It's a win-win for everyone because it allows the consumer to take back control of their devices, it allows the hyper-scale cloud providers to focus on the subscriber services, and the OEMs to focus on creating compelling audio hardware products that differentiate on style and features, which are not only interoperable but also environmentally friendly.

Is the future an open-source, modular audio system with interchangeable cloud services? Talk Back and Let Me Know.

Join Discussion for: So long, Sonos: Meet the open-source audio...