Sonos walked away from the cliff. But abandonment of legacy customers is precisely what's wrong with IoT.
Written by Jason Perlow, Senior Technology Editor on Jan. 24, 2020 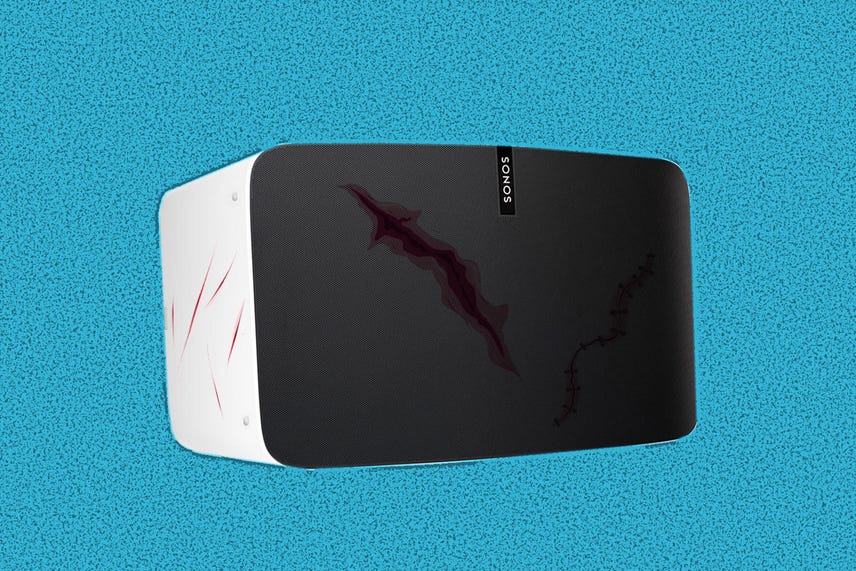 Earlier this week, Sonos notified customers it would end support for a number of its legacy products released in the first 10 years of its existence, including the popular first-generation PLAY:5 speakers. But some of these affected products were still on the market as late as 2015, such as the Connect and Connect:Amp, which would make them only five years old from the date of purchase.

On Thursday, January 23, following a backlash from customers and the technology media, Sonos CEO Patrick Spence authored a corporate blog post apologizing for this end of support and stated that the company would, in fact, support its older products with bug and security fixes beyond May of 2020 even if new feature updates were not possible.

The reason why Sonos initially decided to end support is that these first-generation products lack sufficient processing power and storage to accommodate new features.

End of service is relatively normal for consumer electronics products that are five years old or more, particularly personal computers and mobile devices. However, what was jarring about the way Sonos approached this end-of-product support for some of its devices is that it also affected products that have been recently introduced, such as the Beam connected soundbar.

Before the CEO apologized and retracted on Jan. 23, Sonos made its customers who own these legacy products aware that, if they continued to use them and have them attached to their Sonos mesh network, not only would those products stop receiving new functionality and fixes but all products connected to that same network would, as well.

To understand this better, this would have been roughly analogous to Amazon stating that, if you bought a first-generation Echo speaker with Alexa, not only would it refuse to patch that model should you continue to use it, but it would stop patching your second and third-generation models as well. The impact on Amazon's customer loyalty would be devastating.

Or imagine a company like Apple telling its customers who use six-year-old iPhones or iPads that cannot take the latest iOS version that, if they are connected to the same Apple ID or home network, their Mac or other current iOS devices will also stop patching. There would be riots in the streets.

To appease its customers, Sonos had stated it would offer a 30% discount on new product purchases should customers agree to recycle them. But it would have come with a catch: Had you decided to recycle the device, the hardware would be remotely erased and made nonfunctional. It would effectively have become a brick.

In my opinion, this would have set a horrible precedent for other large consumer electronics manufacturers that sell integrated IoT systems, such as those with vast developer ecosystems like Amazon or Google, the latter of which has already demonstrated it cannot be trusted to maintain support commitments.

Fortunately, Sonos walked away from the cliff. The CEO confirmed it would continue to provide bug and security patches to these older speakers without providing newer functionality. While the details have not yet been finalized, it will also allow customers to isolate the legacy devices on their network, so that the current-generation products can continue functionality improvements.

In the past, I have advocated for the open-sourcing of legacy firmware as well as open documentation of device driver and cloud service interfaces. This would be essential for the community to assume the responsibility of post-life support. Community-supported firmware already has a precedent with the home wireless router ecosystem, with open firmware projects such as DD-WRT and OpenWrt, as well as for legacy Android devices like AEX and Lineage OS.

The availability of open firmware is essential when a manufacturer of such devices becomes insolvent. This scenario has happened far more than what is happening with Sonos. For instance, in March of last year, the Jibo robot ceased to function when its accompanying cloud service ceased operation. Similarly, in December 2015, the Aether Cone, a smart speaker not unlike the Amazon Echo, was lobotomized and became a dumb Bluetooth speaker when the company's venture capital resources dried up. The device could no longer talk to the Rdio service, which also went belly-up in the same timeframe.

How long should IoT products live?

It's not just devices from companies that go insolvent, though. It's also happened with completely healthy companies that decide a product line is no longer profitable. NetGear, for example, discontinued its VueZone wireless home security video cameras in 2016 and shut down the cloud service, making the devices completely inoperable. Google shut down its Revolv wireless hub in April 2016 and had to refund customers their money. And while it did not break the functionality of the devices entirely, it severed the interoperability of its Works With Nest (WWN) ecosystem in favor of its Google Assistant, leaving hundreds of developers with connected devices in the lurch having to re-write their integration services.

How long is a reasonable expectation of life for IoT products? I think it depends on the capabilities of the microcontroller powering the device and if the manufacturer can open source any of the interfaces or firmware.

A tiny low-power solid-state microcontroller that is used in a residential IoT gateway -- such as what Lutron has for the Caseta dimmer switches -- should last 10 years, easily, barring some catastrophic electrical event. Nevertheless, those gateways/smart bridges are easily replaceable and inexpensive and should not impact the actual lights or switches, which have minimal functionality. Lutron should be committing to supporting the dimmer switches themselves for 20 years, even if the gateway requires replacement due to new features (such as upgrading it to WiFi beyond wired ethernet or adding 3rd party device support for Zigbee).

But something that could be considered critical home IoT infrastructure and costs hundreds of dollars, such as a Nest or Ecobee thermostat, should last over 10 years in terms of software support without having to replace it. Especially something like a multi-dwelling HVAC controller made by Honeywell or a solar power control system, such the Envoy made by Enphase, which runs into the thousands of dollars.

The same can be said for significant infrastructure control systems such as the main computer in an electric car like Tesla. Old gasoline cars have expected lifetimes of as much as 10 or even 20 years if properly maintained. Can we honestly say with a straight face that we hope that a Model 3 manufactured in 2019 will be supported by Tesla's parts and maintenance network in 2029? Let alone 2039?

At least with a GM or any other American car, I can expect that the third-party parts and service ecosystem will allow me to find an independent mechanic. I can even repair my 2016 Camaro myself should I keep it in good working condition with the light miles I put on it. Everything we know about electric cars tells us they have less wear parts than a comparable mechanical gasoline car; the electric motors should last indefinitely, even if the batteries need replacement every five to seven years. Its critical component, the central computer, will require ongoing patching and support, or at the very least, it'll need to be capable of field replacement or upgrades. We don't know what Tesla plans to do about aging avionics in older vehicles.

Product end-of-life should be planned and announced long in advance and should include open-source of firmware and driver interfaces so the community can take charge if needed. Additionally, there should be organizations formed for handling and tracking the product life cycle of IoT devices, as well as certifying manufacturers that commit to agreed-upon strategies for end-of-life and post-life planning, such as a community handoff of firmware and interfaces. Sonos or the Echo/Alexa devices should have the ability to be supported by the community with replacement firmware and replacement cloud services.

While I was initially angered and disappointed that Sonos was abandoning the initial early adopter customers that made personal investments in its old hardware, I am pleased that the company made the better decision to move forward with an alternative support plan for legacy Sonos devices. I believe it turned out to be a positive learning experience and allowed Sonos to maintain their otherwise excellent reputation for customer service and product support.

Are you reconsidering additional investments in your Sonos system? Talk Back and Let Me Know.