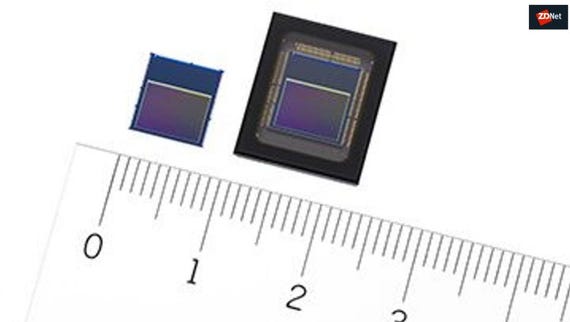 The new image sensor has a configuration consisting of a pixel chip and logic chip. The logic chip, called Sony's digital signal processor (DSP), is dedicated to AI signal processing, along with memory for the AI model.

According to Sony, the DSP eliminates the need for additional hardware, such as high-performance processors or external memory, making it "ideal for edge AI systems".

By using AI, Sony said the sensor is also able to output metadata -- semantic information belonging to image data -- instead of image information, which reduces data volume and addresses privacy concerns. For practical applications, Sony said the logic chip within the image sensor allows it to send data for each individual output image frame for AI processing within a single video frame.

Users can also write their own AI models into the embedded memory according to their requirements or the conditions of the location where the system is being used.

"For example, when multiple cameras employing this product are installed in a retail location, a single type of camera can be used with versatility across different locations, circumstances, times, or purposes," Sony said.

The AI-equipped image sensor will come in two form factors, being available as a bare chip -- called the IMX500 -- or with ceramic packaging as the IMX501.

Despite the novel coronavirus outbreak affecting supply chains around the world, Sony said in March that its imaging and sensing solutions segment had not experienced any "material impact".

It did note, however, that there was a potential risk for sensor sales to be impacted by an eventual slowdown in the smartphone market from COVID-19 and that its electronics business had been hampered by supply chain issues arising from the outbreak.

Its manufacturing plants in Malaysia and the UK will be shut down until late April.

This includes frontline medical workers, children and educators, and those in the entertainment industry.

A lineup of aerial hardware stacks to fit a variety of enterprise photography and video use cases.

The companies are banding together to build a system capable of handling the world's new digital needs.