A self-driving car connected to Spark’s trial 5G network is being tested in Auckland’s Innovation Precinct.
Written by Corinne Reichert on March 12, 2019 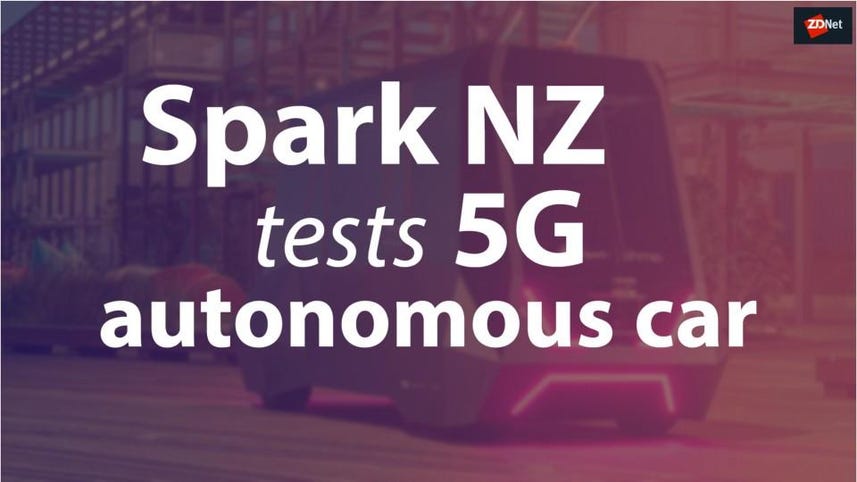 New Zealand carrier Spark has begun testing the first 5G-connected autonomous vehicle in the nation under a partnership with Ohmio Automotion.

The driverless car, which is being trialled on the streets in Auckland's Wynyard Quarter Innovation Precinct this week, is connected to Spark's test 5G network at its innovation lab and carries up to four passengers.

Passengers can use a tablet to hail the autonomous vehicle, which then arrives for pick-up and drives around a programmed seven-minute loop at a maximum speed of 7km/h, though it is capable of 25km/h. An in-vehicle dashboard provides information on how and what the car is monitoring in real-time via LIDAR.

At the same time, Ohmio has been testing autonomous shuttles at Christchurch Airport -- with an upgraded model of the vehicle ensuring it integrates with Spark's 5G connectivity -- and is planning to launch more trials in university campuses, airports, hospitals, and retirement villages across New Zealand.

Ohmio is also planning to apply for on-road certification to test its vehicles on public streets.

"This test with Spark is only the second of its type in the world," Ohmio head of Research and Development Dr Mahmood Hikmet said.

"A 5G network can be up to 100 times faster than 4G, which unlocks the true potential for autonomous driving, as messages need to be transmitted and decisions made in real-time. A significant drop in latency ... will give cars human-like reflexes and opens up multiple possibilities for connected infrastructure and a smart city ecosystem."

The final decision has yet to be made, with GCSB Director-General Andrew Hampton at the time saying the "ongoing regulatory process" falls under the nation's Telecommunications Interception Capability and Security Act (TICSA).

"I can confirm the GCSB, under its TICSA responsibilities, has recently undertaken an assessment of a notification from Spark. I have informed Spark that a significant network security risk was identified," Hampton said.

Spark said it had notified the GCSB of its intention to use Huawei equipment in its 5G radio access network (RAN).

"The Director-General has informed Spark today that he considers Spark's proposal to use Huawei 5G equipment in Spark's planned 5G RAN would, if implemented, raise significant national security risks," Spark said in November.

"This means Spark cannot implement or give effect to its proposal to use Huawei RAN equipment in its planned 5G network."

Spark called the decision -- which followed the Australian government banning Huawei for 5G in August -- disappointing, but said it would not affect the telco's plans to launch 5G by July 1, 2020.

At CES 2019, Qualcomm's Sanjeev Athalye discussed how 5G will be critical for emerging technologies and fields such as driverless vehicles and telemedicine.

At MWC Americas 2018, TechRepublic spoke with Glenn Lurie, CEO, Synchronoss Technologies about how 5G networks will enable autonomous vehicles to communicate with each other and become four-wheeled clouds.

Infrastructure upgrades and IoT costs will lead to massive amounts of money spent on 5G networks, according to a Greensill report.

US tells Germany to ban Huawei on 5G or it will share less intelligence: Report

The US has reportedly said it will cooperate less with German intelligence agencies if Germany allows Huawei to take part in its 5G build-outs.