Full Bio
on March 31, 2020 | Topic: Coronavirus: Business and technology in a pandemic 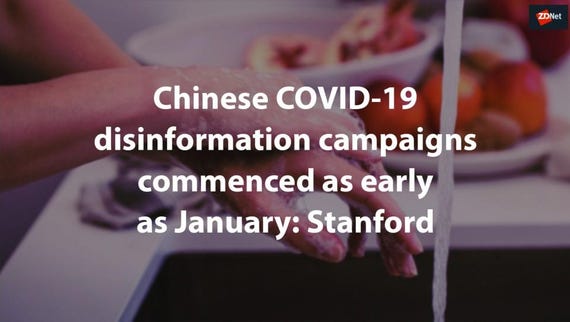 Since the beginning of the coronavirus outbreak, there has been an uptick in misinformation circulating online. In particular, there have been various conspiracy theories surrounding the origins of coronavirus which has sparked a US-China blame game.

According to researchers from Stanford, this blame game, in combination with inaccurate news reporting and social media conspiracy theories, culminated in the Chinese Foreign Ministry's Information Department's deputy director-general, Zhao Lijian, early last month sharing conspiracy theories on Twitter that accused the US military of starting the coronavirus outbreak.

"Groundless speculation about the origins of the pandemic did not begin with Zhao, but the case of his eye-catching tweets reveals how China's changing propaganda tactics have interacted with mangled news reporting, social media conspiracy theorising, and underlying US-China tensions -- all resulting in high-profile misinformation about a public health crisis."

The study, titled Coronavirus Conspiracy Claims: What's Behind a Chinese Diplomat's COVID-19 Misdirection, revealed that the US military conspiracy theories began circulating as early as January on a Chinese language YouTube channel that disseminated the idea that coronavirus was the result of US genetic warfare.

By February, the study showed that Twitter activity had included speculation that the virus was linked to US attendance at the Military World Games, which took place in Wuhan in October 2019. This idea was featured in the conspiracy theory article shared by Zhao.

At the same time, Chinese state media has carried a variety of narratives about the pandemic throughout its course, with reporting shifting from suspicions of animal origin to questions about whether the virus could have been carried to Wuhan by humans from another location, the study said.

"Over a period of six weeks, official Chinese media references broadened uncertainty about COVID-19's origins from an unknown animal to an unknown place," the study said.

According to the research, by March 4, uncertainty about the geographic origin of the virus had made it to the Foreign Ministry spokesperson's podium, where Zhao argued against the idea that the pandemic may not have originated from China.

With COVID-19 misinformation being prevalent across the internet, the world's largest social networks jointly pledged last month to remove such content

"We're helping millions of people stay connected while also jointly combating fraud and misinformation about the virus, elevating authoritative content on our platforms, and sharing critical updates in coordination with government healthcare agencies around the world," the companies said at the time.

While social networks are striving to knock down fraud and misinformation, the study said there are still conspiracy theories being circulated.

"In times of uncertainty, speculation, and political blame games, continued vigilance is key when it comes to assessing and sharing information -- even, or sometimes especially, when it comes from state channels," said Vanessa Molter, the study's author.

"Social media companies need to maintain their efforts to proactively remove unfounded speculation and disinformation on their own platforms, regardless of who posts it."