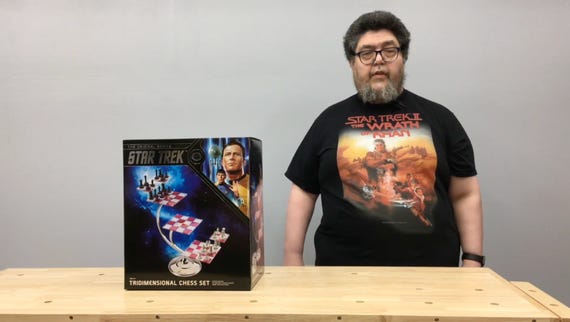 July 20 is International Chess Day (also called World Chess Day by the United Nations). In honor of the holiday, the folks at The Noble Collection asked me if I wanted to review the Star Trek chess set. Sometimes my job is really cool.

In the accompanying video, you can see the entire chess set in action. It's actually a lot nicer than I expected. I wasn't entirely sure what to expect, but I guess I figured it would be some kid's toy. It's not. It has much more of a collectable quality. Watch the video. You'll see.

More to the point, though, I got to thinking about what July 20th really means to me. On July 20th in 1969, human beings stepped out onto the moon's surface for the first time. I was a little boy way back then, watching on an old black and white Zenith TV.

I've often wondered how Michael Collins felt. He stayed in the command module, orbiting the moon, while Neil Armstrong and Buzz Aldrin went down to the surface. On the one hand, he was a critical part of the crew of Apollo 11. On the other hand, he got so close but never made it onto the moon's surface.

While I was putting the video together, I thought a lot about the relationship between the original Star Trek series and the real-world space program.

The first episode of Star Trek aired on Sept. 8, 1966. Gene Roddenberry had actually started writing his treatment (basically, a concept document) for Star Trek on March 11, 1964. Think about that date.

The last crewed Mercury flight (which launched just one astronaut into space at a time) launched on May 15, 1963, with Gordon Cooper in the cockpit. Cooper was an aeronautical engineer and an Air Force test pilot. He was also the youngest of the Mercury astronauts.

Roddenberry penned the basic concepts for Star Trek after Mercury but before Gemini (the missions with two astronauts in the cockpit). The Enterprise was originally called the Yorktown in his treatment. The original pilot, "The Cage", was filmed in 1964 as well. That pilot didn't make it into production, but some of the characters we've now come to know and love in Star Trek Discovery were defined back then, including Captain Pike, Number One, and, of course, Mr Spock.

The original Star Trek series was picked up by Desilu Productions, at the time a leading independent TV production firm.

Fun fact: Desilu was named after its owners and founders, Desi Arnaz and Lucille Ball. Yep, that Lucy and Desi. As the story goes, Lucy was actually the person who greenlit Star Trek, believing it would have life in this concept she had, called syndication. Back then, reruns and syndication weren't the juggernauts they became. Lucy not only enabled Star Trek but pioneered the entire concept of second-run TV shows.

As hard as it is to believe now, that first Star Trek show with Kirk, Spock, and McCoy wasn't a huge success. After ratings dropped, it was cancelled. The last episode aired on June 3, 1969 -- about a month and a half before Armstrong and Aldrin walked on the moon.

As I edited the video, my thoughts took me along two paths. The first, of course, was that all that went into the original series — ranging from Klingons to teleporters, from handheld communicators to automatic sliding doors -- preceded the very first moon landing. Contrary to popular legend, the communicator did not inspire the cell phone. Mobile phones were under development before that time. But it was still cool.

My other path of thinking was just how well some of the original plot devices in Star Trek TOS have held up over time. If you've watched the subsequent series, whether The Next Generation or Discovery, it's interesting to see just how much of the basic foundational mythos of Star Trek was put into practice in that original series.

Get your space, chess, and Trek binge on

Next, I want to loop in some space and chess-related TV recommendations, in no particular order. The next season of the animated Star Trek series Lower Decks premieres in three weeks, on August 12.

I've been watching the Apple TV+ series For All Mankind. It's an alternate history version of the space program where Armstrong and Aldrin landed after the Russians. I got Apple TV+ for free when I bought an inexpensive iPad, but I'd pay the $4.99 a month just to watch this series. It's tight and can be very suspenseful in places.

It also spotlights some of the unsung roles women played in America's early space program, including the Mercury 13. Most people don't know that 13 exceptional female pilots were trained to be astronauts along with the men for that mission. A character in the show, Molly Cobb, is based largely on Jerrie Cobb, a truly amazing woman who never made it into space but was nominated for a Nobel Peace Prize for her very dangerous work flying supplies to indigenous tribes in South America.

Be forewarned, For All Mankind is kind of like Game of Thrones in space, where bad things always happen. For All Mankind gets very, very dark. But it's still a very cool series.

Let's loop back to chess. If you haven't watched The Queen's Gambit on Netflix, you're missing a great show. I avoided it for the longest time because the idea of a series around chess seemed like it might be pretty tedious, but some of my friends raved about it. So, my wife and I watched it together, and I must admit, it was riveting. Well worth your time.

And with that, I'll sign out for now. Have a happy International Chess Day/ Moon Landing Anniversary. If you've watched any of these shows or have any cool Star Trek props or stories, please feel free to share in the comments below.

And what about the 3D chess set I reviewed? Do you plan on getting one? What about giving one as a holiday gift? The comments are there for you to let us know.