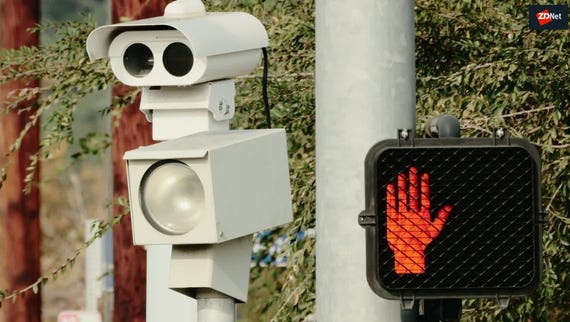 In the age of smart cities, even throwing an empty can into a bin is no inconsequential act. And when the local city council is looking at ways to safely exit three months of lockdown during a global pandemic, public bins can even take on an unexpected role in helping to chart the road to recovery.

That's what Tom Forth, the head of data at the Open Data Institute in Leeds, found out when he looked at the graphs showing the recent activity of 30 smart bins dotted around the city center.

Smart bins, in addition to compacting up to five times more waste than traditional bins, also ring up for help when they are full, to let local services know that they need collecting. "We know how often they need to be emptied, so we also know how often they get filled up," Forth tells ZDNet.

"We looked at that data and we've realized that the speed at which the bins fill up is a pretty good proxy for the economic activity going on around them," he says.

The smart bin data is published by the Leeds City Council, who Forth works directly with, on an OpenStreetMap. Because Forth and his team know exactly where the bins are located in the city, they can draw conclusions about residents' behaviors.

For example, explains Forth, the amount of rubbish going into bins around train stations has fallen down, and is showing no sign of coming back up, suggesting that public transportation is still being avoided by city dwellers.

On the other hand, a lot more waste is being produced in the north of the city, where the Leeds City Council buildings are located, which is due to council workers coming in to provide essential services during the pandemic.

On top of smart bin metrics, Leeds' local council publishes all sorts of information about the city in the form of open data. "We can combine the smart bin data with other data as well, such as information taken from footfall cameras in about 30 locations around the city," says Forth.

"It can now be used to understand what changes are happening as people return or don't return to work, and measure the speed at which the economy is going back up. That's pretty important at the moment."

In turn, the city council can make data-informed decisions based on how people behave in the city center, and adapt policy accordingly. Forth also argues that the smart bin data could boost small businesses' ability to recover in the long term, as they get a clearer picture of the places where potential customers are congregating.

While big firms are able to pay consultants to determine the best locations to open a new site, small traders don't have the deep pockets to carry out this type of in-depth analysis. By making smart city data as open as possible, local businesses can ultimately make better decisions to remain sustainable.

SEE: Smart cities will track our every move. We will need to keep them in check

It's not only about the information gathered from smart bins. Forth argues that now is a good time for city planners to think outside the box when it comes to collecting data that will be useful for recovery planning.

Leeds' smart bins were never intended to help the local council understand how the city moves during a global pandemic. "The data on bins is being collected for a very specific purpose: to make waste collection more efficient," says Forth.

"Its secondary benefit, which could never have been predicted, came out of COVID-19," he continues. "And that could be the case for all kinds of other data collection, and it's probably something we don't value enough in the smart city discussion."

In other words, rather than focus on the data that could be collected, city planners should start with the potential wealth of information already available to them, and which can be re-purposed to manage the crisis.

For example, Google realized early on in the pandemic that public health officials could hugely benefit from aggregated and anonymized insights taken from its Maps app. The Search giant published Community Mobility reports showing movement trends over time by geography.

The reports for the UK show that, towards the end of June, traffic in restaurants and cafes was down by 59% compared to baseline trends, while public transport was 49% less active. Traffic to parks, in contrast, was only down by 7%.

In London, an initiative dubbed "Project Odysseus" was recently launched in collaboration with the Turing Institute, that aims to understand the city's "busyness" and inform policy-makers as the capital eases lockdown restrictions.

Data is, therefore, key to effective policy-making – particularly open data, according to Forth. After all, if Leeds had kept access to smart bin metrics a privilege reserved for council workers, it might have never have been realised that the data could be used to gather insights about the economic activity in the city.

Who knows what more could be done with the results shown by air-quality sensors or car-counting cameras? Opening information to the brains of more developers can only lead to extra innovation, argues Forth.

Case in point: before the COVID-19 crisis hit, Forth had been leveraging the data published by the city council about waste management – not only smart bin metrics, but also bin collection dates, updates on where to find recycling bins and reminders on how to trash rubbish correctly.

The Leeds Bins app is currently used by a fifth of residents. And the tool came in handy when the council decided to reopen recycling points in early May, and introduced a booking system to avoid queues.

"The council needed to get the message out about the booking system," says Forth. "We could just push out that message to one in five people in Leeds, for free and with a link, just using the app's dashboard."

Whether the next months see restrictions ease further, or second waves of infection forcing cities to shut down again, one thing is certain: local city councils are bracing themselves for huge challenges. Innovation will have a role to play – and it is likely that it will come from unexpected places. It may even start with bins.

Join Discussion for: Talking rubbish: How smart bins are helping...