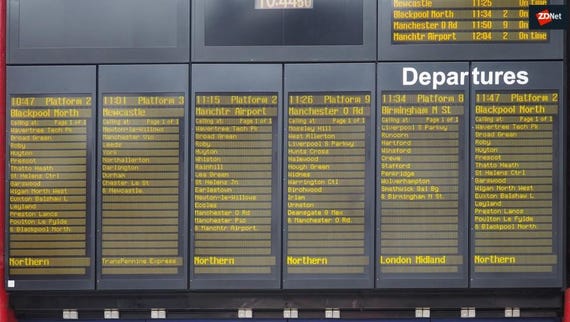 After months of irrational cravings for a jam-packed tube at rush hour, or for a sweaty queue in a busy pub, cities are finally starting to re-open. Life as we knew it, however, isn't resuming anytime soon: while the COVID-19 virus is still circulating, a degree of social distancing is still on the cards.

But in a city like London, where about two million people used the tube on a normal pre-COVID-19 day, keeping residents at a safe distance is easier said than done. Monitoring and controlling the city's every pulse, therefore, will be key to lifting restrictions. And it seems that once again, technology might have some solutions to offer.

"We are not looking at a post-COVID situation anytime soon, but we are looking at living with COVID for a long time," Sandy Tung, program manager for smart city program Sharing Cities, tells ZDNet.

And in the short term, explains Tung, managing mobility is topping the list of priorities. Anybody who has gone through a central London Tube station around 5pm on a weekday would understand why: "We are worried about not easing lockdown restrictions in a way that facilitates re-infection," says Tung.

One solution, of course, consists of encouraging new behaviors: namely, to jump on a bike instead of on a public transportation line. But as a second step, city planners are also counting on smart technology to get a precise idea of how residents move around the city, and plan accordingly.

"A lot of thought is given to using sensors or IoT devices that are installed around various parts of the city, and use the data coming through to monitor things like footfall," says Tung. "We can analyze that and understand how people move around, or determine hotspots."

The Greater London Authority, together with the Turing Institute, has already launched "Project Odysseus" – an initiative that brings together large-scale datasets capturing mobility, transportation and traffic activity across London, to understand the city's "busyness" and inform policy makers as the UK capital eases lockdown restrictions.

Data is fetched from a variety of sources, including live CCTV cameras and traffic intersection monitors, but also GPS activity from air-quality sensors, as well as Oystercard data, point-of-sale counts and public-transit activity metrics.

Watching the city move in real time will let decision makers understand trends such as how much residents are applying social distancing measures, or whether they are staying at home. The project will also serve as an early warning system, triggering targeted interventions within boroughs if necessary.

Philip James is the director of the Newcastle Urban Observatory, which holds one of the largest sets of publicly available real-time urban data in the UK. "I have always argued in favor of having real-time data in cities," James tells ZDNet, "and the COVID-19 crisis has absolutely demonstrated that this is the way to go."

"When lockdown started, we provided data on an hourly basis to see how the restrictions played out on the ground, and how the message was landing," he adds. "We even put out a COVID-19 dashboard with metrics. I suspect there is going to be a lot more interest in this type of initiative now."

The dashboard has been fed analysis from 1.8 billion pieces of observational data, taken from 3,500 active sensors spread out across Newcastle. James and his team register 7,000 observations a minute, from traffic and pedestrian flows, to car park occupancy and GPS bus trackers; but also air quality, rainfall, and even beehive activity.

The Observatory's latest conclusions show that pedestrian movement has reduced by 95% compared to the annual average, reflecting that people are effectively following government guidelines. And as the city exits lock-down, the dashboard's role is likely to become even more critical in informing policy making.

James explains that, for example, Newcastle has introduced one-way systems for pedestrians, which is reflected in the data as north-oriented or south-oriented footfall. This means that the Observatory's dashboard is able to identify spots where residents have to cross over, for example to enter shops, and advise on where to place specific street furniture to avoid clusters.

"This is a new period for everybody, and the councils are trying to find the safest possible way to re-open against an ever-changing background," says James. "There is certainly a role for tech to give instant responses back to decision makers on how busy things are, how many pedestrians there are, and how efficient new measures can be."

But as useful as smart technologies will be to ease the relaxing of lockdown restrictions, there is a flip side to the coin. It is easy to see why an extra dose of resident tracking in cities might cause some serious privacy concerns about the rise of surveillance technology.

Of course, many of the sensors that are currently used, such as footfall monitors, do not link to individual profiles, and are not intrinsically problematic. But that is not the case for every smart tool.

"A CCTV camera is much like a knife," says James. "You can use it to whittle a piece of wood, or you can use it to stab. With CCTV, you can do tracking, you can do re-identification, you can do facial recognition, and all sorts of other things. It's an object that has multiple uses, and comes with risks."

The Newcastle Urban Observatory, in fact, has developed an algorithm that uses CCTV footage in public areas to automatically measure social distancing, and, using a traffic-light indicator system, anonymously flag instances where pedestrians are standing too close to each other.

The Observatory's data is open, and managed by Newcastle University. As such, it is unlikely to cause concern among privacy activists; but some types of monitoring can be more worrying.

In France for example, the government trialed facial-recognition software in a Parisian metro station, using six cameras that could identify passengers who weren't wearing a mask. The initiative was short-lived: not even a week after the start of the trial, the French data protection agency CNIL condemned the privacy intruding technology, and the cameras were shortly removed.

For James, it is key to make sure that citizens trust the organizations that own the data about them. "We need to know how this data is governed, who owns it, and who has access to the platform that does it," he says. "Otherwise, there is a risk that you won't bring citizens along with you."

James points to the smart city initiative led by an Alphabet-owned urban design business in Toronto. The project was recently axed due to the economic uncertainty caused by the pandemic, but was already running into a series of problems because of backlash from privacy concerned leaders who were worried about surveillance.

Ensuring public trust, therefore, is critical; and especially because the cost of abandoning smart city technology, in the context of COVID-19, will be far greater than in normal times. "You have to think about what happens, in the long term, if you don't implement these processes," says James.

Smart sensors and IoT devices won't only be used by city planners to monitor the immediate impact of measures linked to the pandemic. In the next few months, they will also be key to the recovery of local businesses, as policy makers start identifying where residents work, shop, eat out or go for drinks.

SEE: Remote working: How the biggest change to office life will happen in our homes

Speaking at the CogX 2020 conference, Jamie Cudden, smart city lead at Dublin City Council, mentioned the future of Dublin's so-called "Silicon Docks" – a nickname for an area in the city that is home to offices for Facebook, Twitter and Google.

"That's 15,000 to 20,000 jobs, most of which have now been given the opportunity to work from home forever," said Cudden during the conference. "It makes you think of what those business districts will look like in the future."

If COVID-19 sees off rush hour, what does it mean for pubs, restaurants and shops in previously busy city centers? One thing is certain: data can be used to understand these new trends, identify the ones that will last after the pandemic, and help the local economy recover from the changes.

Back in London, the Sharing Cities' program manager Sandy Tung confirms that this is at the heart of long-term recovery plans for the UK capital. City planners are already thinking of ways to use data meaningfully to inform local businesses.

"Even though businesses are re-opened now, we're not going to see large numbers of people flocking into central London, like we used to," says Tung. "We can use this information to help businesses adapt."

Getting this across to citizens is the next challenge. As "cool" as all of these projects are, says Tung, they will only work out if residents engage with them.

"It's not just about collecting data off of people, it's about engaging residents, business owners, and the wider community with what's happening," says Tung. The smart city has a bright future ahead, therefore – but only if it stays clear of a bad reputation. And as cities go back to a form of normal life, keeping track of the tracking methods has to remain front-of-mind.

Join Discussion for: Smart cities will track our every move. We...