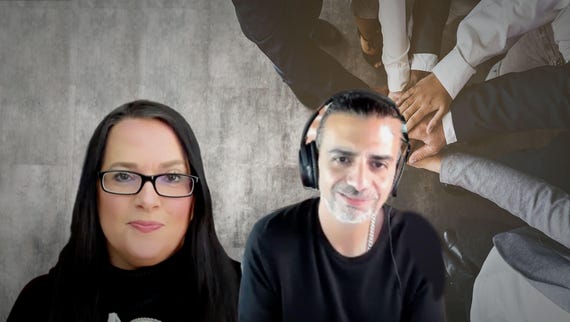 For the last two years, Microsoft has been speculating about what "the class of 2030" might look like – and at the Bett education-technology conference today in London, the company gave an update on its vision for the classroom of the next decade.

While smartphones and other glowing screens are often labeled a distraction for students (and the rest of us) and the impact of technology is schools is still being assessed, the 2030 generation of students, according to Microsoft, will be a squad of high-achieving "super-humans", able to amplify and unleash their full potential thanks to hybrid intelligence.

A combination of human and machine intelligence, hybrid intelligence is meant to expand human intellect, rather than replace it. It will happen, said Microsoft, via "meaningful" interactions between students and technology, which will "help students do an even better job at what they already do best".

Daniel McDuff, a researcher at Microsoft, explained that hybrid intelligence occurs when a technology is fully at the service of the user, not the other way round. "Most technologies today come in the form of screens that are hungry for our attention," he said. "Shouldn't tech increase productivity instead?"

"The collaboration between humans and AI could give us almost superhuman powers to learn, but it is important that those systems work for us, to achieve what we want to do."

In particular, Microsoft identified as part of its "class of 2030" initiative that hybrid intelligence will be most effective in schools when it will assist humans in learning social and emotional skills.

To illustrate, McDuff presented a "focus agent" project he is working on, an enhanced digital personal assistant that could help students, for instance, achieve specific tasks. At the beginning of the day, the agent asks the user what they want to achieve and schedules a time to focus on particular tasks.

As the task's time approaches, the assistant can ask the user how they want to go about completing their objective, and once it is over, they let the user explain how they feel about the task and if they want to repeat it.

"It assists people in completing their objectives," said McDuff, "so that they can be more productive and focused. It will stop tasks from bleeding into personal time, too."

He added that Microsoft is building fully-embodied digital versions of the personal assistants – so it sounds like they will even have the appearance of a life coach.

Another example of hybrid intelligence consists of using AI tools to understand how students work collaboratively, which could let researchers quantify dynamics that until now have remained invisible. For example, AI could highlight the need for a group leader in a class group, or spot unconscious biases happening when pupils interact.

Hybrid-intelligence technologies have myriad other applications in the classroom, some of them already grounded in 2020 technology. They include AR and VR tools, for example, which lets students, in McDuff's words, "use tech in the moment rather than be glued to a screen".

Similarly, the company is working on a gesture-recognition project, so that users can control videos, play music or call a digital assistant using hand poses.

Microsoft's presentation translator, a PowerPoint plugin, creates real-time subtitles for what the teacher is saying, while AI-powered speech recognition and translation tools let students hear what is being said in their native language.

Anthony Salcito, the vice president of Microsoft Education, said at the conference: "We need to recognize the need to embrace a hybrid intelligence to be able to achieve more. With new technology, we will have to think differently about student achievement."

Join Discussion for: Tech in the classroom? Microsoft says AI...