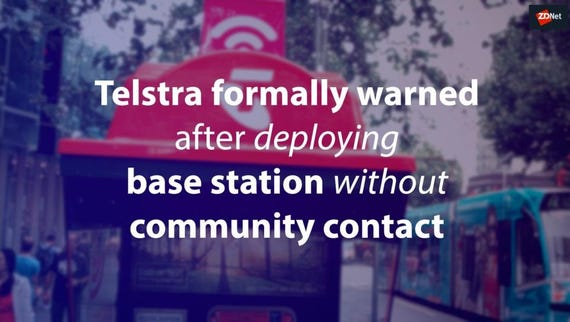 Telstra has been given a formal warning by the Australian Communications and Media Authority (ACMA) following an investigation that found the telco had deployed a mobile base station in Canberra without providing any notice or opportunity for people living in the affected community to have their say.

The ACMA commenced the investigation after receiving a complaint about Telstra's deployment of a mobile phone base station on the rooftop of 10 Binara Street, Canberra.

The complaint was made during the same month when the mobile base station was deployed in July 2018.

According to the ACMA, Telstra's planning consultant, Kordia Solutions Australia, who was responsible for handling any complaints regarding the deployment, had failed to respond to the complaint.

The telco also did not provide an opportunity for people living near the deployed mobile base station to give their input on the consultation plan prior to it being installed.

Telstra had notified the Secretariat of the Environment, Planning and Sustainable Development, Directorate – Planning (ACT Planning) in May that it was seeking comment on its draft consultation plan for a proposed mobile phone base station on the rooftop of 10 Binara Street. However, the telco did not notify all of the people that would be affected by the deployment about the opportunity to respond to the consultation.

Telstra's failure to contact and provide relevant information to people living within the immediate vicinity of the mobile base station, as well as its failure to acknowledge any complaints written to them are breaches of the Mobile Phone Base Station Deployment Code, the ACMA said.

"There is public concern about the roll-out of mobile infrastructure, including small cell base stations, in residential areas," ACMA Chair Nerida O'Loughlin said.

"Telcos must keep affected communities in the loop and consider their feedback when establishing or upgrading mobile phone base stations."

As Kordia Solutions was the acting agent of Telstra in respect of the mobile base station deployment, the ACMA said Telstra is accountable under the deployment code for Kordia's actions.

Since being given the formal warning, Telstra has conducted a review of Kordia's complaint handling procedures to ensure the deployment code is not breached again. Kordia has also implemented additional peer review processes and regular training to ensure future complaints are escalated to Telstra and handle adequately.

"While the ACMA is not aware of any specific instances of harm caused by the missing or inaccurate information, the scale of the issue and its potential impact on emergency services is very concerning," O'Loughlin said at the time.

10 telcos failed to give data for emergency services purposes: ACMA

ACMA has also received a revision of the Telecommunications Consumer Protections Code from the telco industry, who are pushing for stricter requirements on credit assessments and selling practices.

Nine telcos had no metadata interception plan by mid-2018: ACMA

The ACMA is looking into how to implement new networking technologies to prevent scam calls from coming through to Australians.

Telstra, Optus, and Vodafone fail to provide information to consumers with disability

According to an ACCAN research project, telcos failed to provide information about products catered for consumers with disability when reasonably required 50 percent of the time.

Australia finally has a telecommunications products resource dedicated to people with disability.