Quantum error correction is touted by the university as a key requirement in creating large-scale useful quantum computing.
Written by Asha Barbaschow, Journalist on Oct. 30, 2018 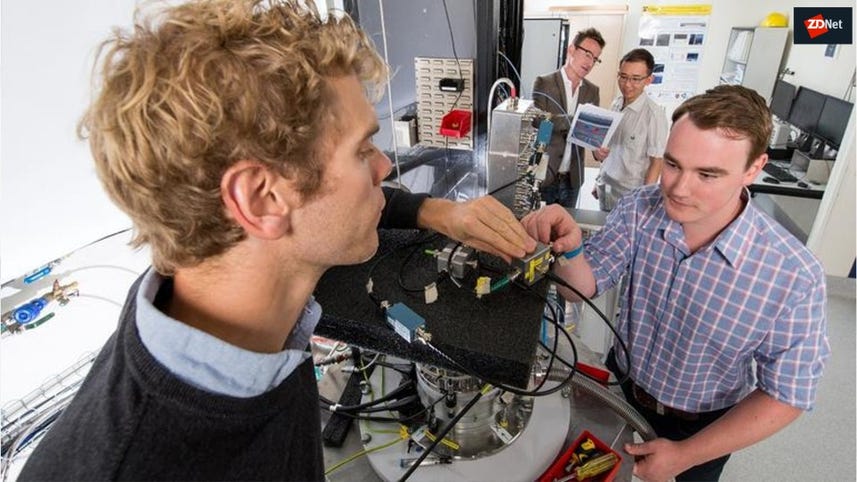 Researchers from the University of New South Wales (UNSW) have announced the results of a test they said has brought a quantum computer closer to reality.

According to UNSW, the researchers have demonstrated an integrated silicon quantum bit (qubit) platform that combines both single-spin addressability, which the university explained is the ability to write information on a single spin qubit without disturbing its neighbours, and a qubit "read-out" process, which is expected to be vital for quantum error correction.

Quantum computers will require millions of connected and integrated qubits and the tests completed by the researchers have proven it is possible to correct the errors that occur in fragile quantum systems.

There are five leading hardware configurations for a quantum computer, and scientists the world over are trying to determine which is going to be the winner. UNSW is going all-in with silicon.

The team, led by Scientia Professor Andrew Dzurak, last year published a design for a novel chip architecture that could allow quantum calculations to be performed using silicon complementary metal-oxide-semiconductor (CMOS) components, which is the basis of all modern computer chips.

The new study combines the two quantum techniques for the first time, which UNSW said confirms the promise of its approach.

Dzurak's team had also previously shown that an integrated silicon qubit platform can operate with single-spin addressability, which is the ability to rotate a single spin without disturbing its neighbours.

Read also: How the industry expects to secure information in a quantum world

According to UNSW, the researchers have now shown that they can combine single-spin addressability with a special type of quantum read-out process known as Pauli spin blockade. UNSW said Pauli spin is a key requirement for quantum error correcting codes that will be necessary to ensure accuracy in large spin-based quantum computers.

"We've demonstrated the ability to do Pauli spin readout in our silicon qubit device but, for the first time, we've also combined it with spin resonance to control the spin," said Dzurak, who is also a program leader at the Centre of Excellence for Quantum Computation and Communication Technology (CQC2T) and Director of the NSW node of the Australian National Fabrication Facility.

"This is an important milestone for us on the path to performing quantum error correction with spin qubits, which is going to be essential for any universal quantum computer."

This new combination of qubit readout and control techniques is a central feature of its quantum chip design, UNSW explained. As qubits are fragile and require constant error correction, the combination is also a key requirement in creating large-scale useful quantum computing, however, this creates significant overhead in the number of physical qubits required to make the system work.

"By using silicon CMOS technology we have the ideal platform to scale to the millions of qubits we will need, and our recent results provide us with the tools to achieve spin qubit error-correction in the near future," Dzurak said.

"It's another confirmation that we're on the right track. And it also shows that the architecture we've developed at UNSW has, so far, shown no roadblocks to the development of a working quantum computer chip."