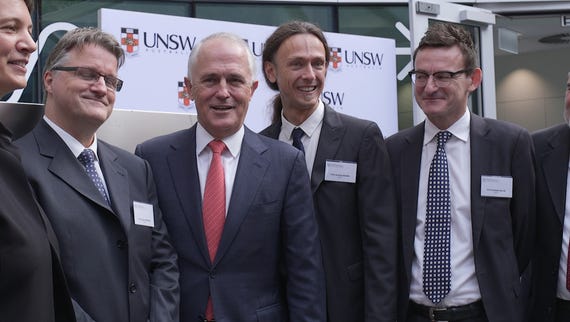 The University of New South Wales (UNSW) officially opened its new Centre for Quantum Computation and Communications Technology (CQC2T), as teams of engineers prepare to secure their spot as the global pioneers of quantum computing.

Officially opening the CQC2T at the university's Sydney campus, Prime Minister Malcolm Turnbull declared that there was no bolder idea than quantum computing, saying it is a technology that revolutionises computing.

"A truly super computer. A quantum computer with a processing power hitherto unimagined, and certainly not realised," he said. "This lab is up to 10 years ahead of any other in the world."

Impressed with the work CQC2T director Professor Michelle Simmons has achieved with her team thus far, Turnbull said UNSW's engineers are doing the best work in the world in this field.

"Right here around us is the world's leading research in that area. If we look at the memory time [in silicon] that has been achieved here, it's a million times more than is being achieved in other labs around the world," he said.

"There has never been a more exciting time to be in quantum computing than right here. This is not just a great position to be in, this is truly a superposition."

The new laboratory complex will eventually house six new scanning tunnelling microscopes that can be used to precisely position individual atoms within silicon.

This now allows a faster production time for researchers, with testing performed at a fraction of the previous rate, and with multiple tests running concurrently.

Additionally, the CQC2T facility will also house six new ultra-cold dilution refrigerators which sit at around four degrees kelvin to allow researchers to measure and demonstrate quantum logic operations of qubits and the atomic-scale circuits they create.

With these new facilities at their disposal, Simmons and her teams have set themselves a seemingly unachievable goal, to build a 10-quantum bit (qubit) chip within the next five years.

"In addition to our fundamental research agenda, we now have an ambitious and targeted program to build a 10-qubit prototype quantum integrated circuit within five years," she said.

Well on their way, a team of UNSW's engineers already unlocked the key to enabling quantum computer coding in silicon, announcing in November that the team had the capability to write and manipulate a quantum version of computer code using two quantum bits in a silicon microchip.

According to UNSW, in achieving this breakthrough the team has removed lingering doubts that such operations can be made reliably enough to allow powerful quantum computers to become a reality.

The breakthrough followed on from an announcement made in October, when another team of engineers from the university built a quantum logic gate in silicon, which made calculations between two qubits of information possible.

At the time, Andrew Dzurak, scientia professor at the university, said it was a landmark result not only for Australia but for the world, as until now it had not been possible to make two quantum bits "talk" to each other and create a logic gate using silicon.

"This result means that all of the fundamental building blocks that are required to make a full-scale silicon processor chip are now in place," Dzurak said. "We're ready to move from this scientific research phase into the engineering stage and the manufacturing stage."

The science funding forms part of Australia's AU$1.1 billion National Innovation and Science Agenda that was unveiled in December.

Eager to add more equipment to the laboratories, Simmons said the AU$46 million has yet to reach the university.