The PC is here to stay - just like Microsoft Paint

In praise of older -- and newer -- software and why the PC will always have a role to play.
Written by Mary Branscombe on July 28, 2017 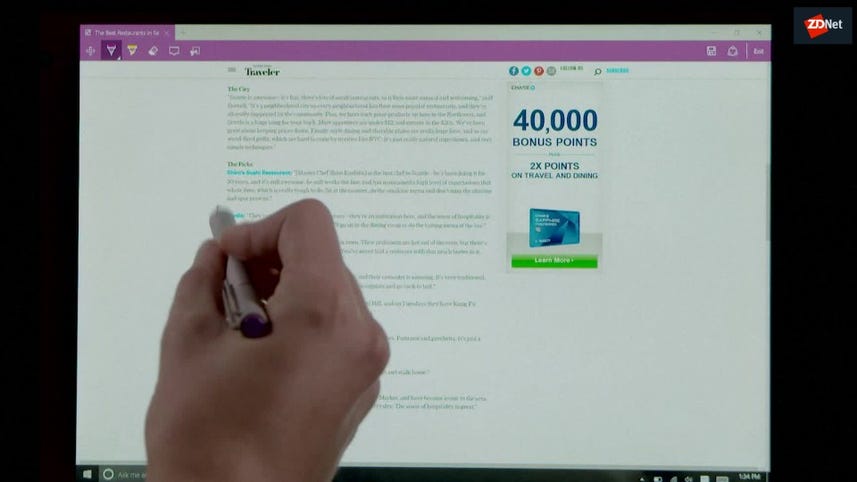 Microsoft never actually said Paint was going away. However, when it described the venerable Paint as 'deprecated' in the release notes for the Fall Creators Update, lots of people jumped to conclusions.

As is always the way with things that have been around for a while and come under threat, people suddenly realised that that this basic, slightly clunky bit of software is actually quite handy -- mostly because it's already there and it does enough things that you need.

In my case, that's cropping or erasing personal information out of the dozens of screen clippings I take, either for reviews or for explaining something on Twitter. I could do similar things in lots of other tools, some of them from Microsoft, but none of them are already installed on every PC that I come across.

Of course, that may no longer be true of Paint once it makes its move into the Windows Store.

For 32-bit apps like Paint -- but not for 64-bit apps like Corel Painter -- that will let them run on the ARM Windows PCs due to come out later this year. And for all apps, it will give you one convenient place to find and install software, and get updates if there are any, as well as a simple way to uninstall it too. It might even save your customizations: Paint currently loses the icons you pin to the Quick Address Toolbar every time you update Windows.

I'm delighted to see the much more powerful but also much more complex Paint.NET moving to the Windows Store, because downloading free software without accidentally clicking on 15 other downloads that might be adware has sometimes felt like jumping through flaming hoops.

That's the economics of free downloads for the PC: the ads are there to pay for the hosting costs, and the experience has improved recently, but the unwary or inexperienced can end up installing software they didn't mean to.

However, Paint moving into the Store isn't necessarily convenient because we don't know if it will still be installed automatically. Some Windows Store apps are always installed on Windows 10 PCs: Photos, Mail, Calculator and so on.

But mostly, you have to go to the Store and pick the apps you want; if you've used the Store before there's a list of every app you've ever tried. You can at least now hide the ones you don't want to see again, or at least some of them -- it's not clear why I can't hide most of these apps.

What would be far more useful would be the option of marking the apps you want to have automatically installed on any new PC you start using. If you find some genuinely useful apps in the Store, you want to have them ready to use on a new PC and integrations like this would show Microsoft really thinking about how people use their PCs.

Announcing a change? Show the details

The upwelling of support for Paint seemed to surprise Microsoft, possibly because it had never planned to kill it off in the first place.

But how were users to know that, when the word 'deprecated' is usually followed in the next release or two by the word 'removed'? That's a good lesson to Microsoft to be much more careful about announcing and documenting even changes that it doesn't think are that important.

Another example: take the announcement of the new 'Skip Ahead' option for Windows Insiders on Fast Ring.

If using builds that might not let you use the clipboard, type searches into the Start menu, or see the toolbar in Tweetium because of a bug in the Edge engine isn't fast enough for you, you can switch to builds for the update after Fall Creators, which will let you try out new versions of apps like Mail and Photos.

That was only announced in the Feedback Hub, not as a full blog post, so you had to be on a Windows 10 PC -- and not, say, on your iPhone -- to read the details.

The Windows team did mention -- on Twitter -- that they'd be coming out with a new website to let everyone read announcements, but not when or how it would be organized or why it would be any different from the current Windows blog. This kind of 'cone of silence' only leads to pain for the Windows team.

They're understandably worried about over-promising and then having to pull features, but that's no more painful than giving a general demo of features without saying which versions of Windows they'll be in, and making everyone think it's all coming in the next update.

Changes have to be made, and if you're transparent and learn to get better at making estimates as you go along, you'll build trust.

You don't get any more criticism for explaining something in full and then making a change than you do for under-explaining and then surprising or disappointing people.

Some of the interest in Paint is nostalgia. Some of it is the usual willingness to assume that Microsoft is making a mistake. Some of it is just being uncomfortable with the fact that 'Windows as a Service' means 'Windows keeps on changing and sometimes change takes away things away'.

But some of it is the fact that simple, basic, limited software that you know how to use and that does a few handy things is actually quite useful, especially if you can depend on always having it there to use.

Yes, there are half a dozen tools that can do all or much of what Paint does. Once you realize that Paint 3D doesn't only do 3D, and that the Menu icon actually represents a File menu, and shapes are hidden under the very Millennial label of Stickers, and you have to use the floating Stamp icon to permanently place a shape, you can do most of what Paint put right under your nose.

But you have to be comfortable with change and while Windows users uniformly want things to get better, they don't necessarily want them to change. The way some users are still clinging to an operating system that's almost old enough to get a driving licence should be proof of that.

The reason that the PC isn't dead, despite all the predictions -- and the way smartphones have taken over a certain amount of consumer technology use -- is that enough people still want and need and use things that have been around for a while. It might be familiarity, or that the simple, basic, limited tool you know how to use is faster than the sleek and powerful new tool that you don't.

When will Microsoft end support for your version of Windows or Office?

As Windows 10 reaches its second birthday, the support clock for earlier versions is ticking. How long until Windows 7, Office 2010, and other currently supported versions reach the end of the line?

Mobile devices have also continued to be additive devices; if the thing you want to do doesn't work in the elegant options on a phone or tablet, you can always fall back on brute force and a PC.

Over time, new things certainly become easier and easier to do on mobile devices (the Virgin Atlantic app makes checking in easier, for example) while some things can only be done on mobile: try ordering a Lyft or signing up for an account with one of the app-only banks on a PC. But you can't always do everything in apps; the Virgin Atlantic app doesn't have a button for claiming missing mileage, but the website on my PC does.

Because this isn't just about native mobile apps versus websites that work on any device, and it's not about Windows versus iOS. It's about the style and experience of software.

It's about minimalism that (at its best) picks the right handful of features versus being able to have more features than you may use but that are there when you really need them. New, shiny and with fewer features -- but just the right ones for you -- is great. New, shiny and missing the one feature that made the software really useful to you in the first place is just plain annoying.

The reason the PC isn't dead is that you can use everything from command line applications -- now including Linux binaries -- to virtual machines, to clipboard utilities that haven't been updated in four years, to the latest version of Photoshop, to finger-painting with digital media in Fresh Paint, to Corel Draw letting you draw smooth vectors with pen strokes, to the Windows Store version of Spotify, to software you wrote yourself.

That means that the PC is going to have a certain amount of cruft hanging around, because there's someone who finds it useful.

This isn't the technology equivalent of Highlander; there doesn't have to be only one.

If something needs to go because it's a security hole, like SMB1 or Flash, that's one thing. But if it still works and it's still secure enough to use, let the people who still find older software useful get on with using it on a platform that makes that increasingly more secure, without putting more and more obstacles in their way or complaining that they don't make all the same technology choices as you.

After all, PC does stand for 'personal' computer.

Read more on Microsoft and the PC